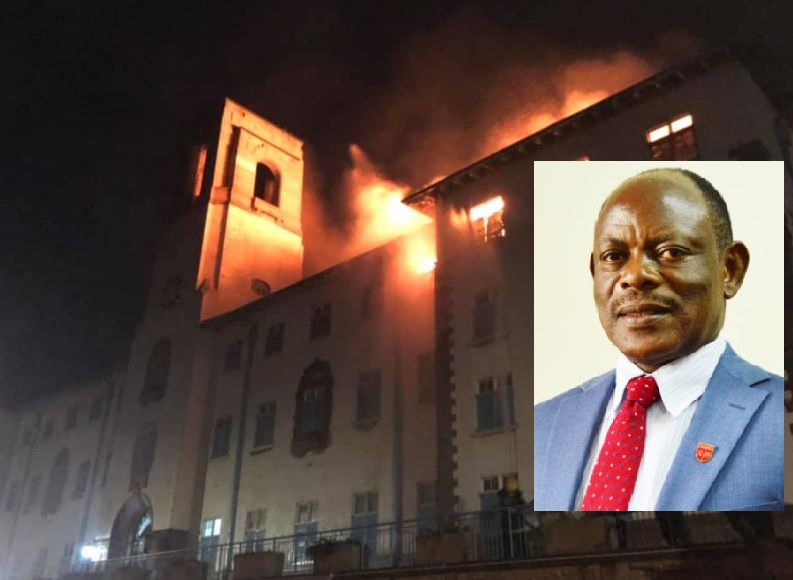 The Vice Chancellor of Makerere University has finally spoken out about the disastrous twin fires that ravaged the university’s main administration building (Ivory Tower’ on Sunday, in which property worth billions of shillings was destroyed.

Prof. Nawangwe issued a statement on Tuesday in which he revealed that government is willing to inject over Shs15.5Bn to rebuild the burnt building. Here is Nawangwe’s statement as follows;

REPORT ON THE FIRE OUTBREAK AT THE MAIN BUILDING

The OC Makerere Police Station at the time was in the CCTV control room and he zoomed the CCTV cameras to the Main Building and indeed the cameras could show that there was smoke coming out of the building.

The OC Station alerted the Makerere University Chief Security Officer who rushed to the Main Building immediately and arrived at the building about 12:47Am.

The Fire Brigade arrived at the scene at 1:10 am initially with 2 fire engines which did not have the capacity to jet water to the roof of the building.

After about 30 minutes more fire engines with better capacity arrived, but by this time the fire had spread through a big part of the roof.

The fire engines experienced a challenge with lack of a fire hydrant within and in the vicinity of the University and had to fetch water from the hydrants at the Fire Brigade Headquarters.

When it appeared to the Fire Brigade that the fire had been completely extinguished, despite smoke still coming off from the Central Registry, they left the site.

Unfortunately, fire again broke out in the Council Room at 8:00 pm but the Fire Brigade arrived within 15 minutes and put out the fire within one hour. The Fire Brigade has been on standby on site, fighting small fires throughout the night.

The Main Administration Building is 79 years old, having been completed in 1941. It is an iconic building and is the symbol of higher education in Uganda and the entire East and Central African Region.

The Main Building is guarded by the University’s security services and the Uganda Police. At the time of the fire outbreak, the officers on duty were inside the building near the entrance and they apparently did not notice the problem until they were alerted by the Chief Security Officer.

Those officers are now under Police custody. The cause of the fire is not yet known. The Criminal Investigations Directorate and the Directorate of Forensic Services of the Uganda Police have commenced investigations. Security on main campus has been strengthened.

Practically all the documents in the Directorates of Finance, Human Resource, including the Central Registry, and the Directorate of Internal Audit were destroyed. Fortunately, all hard copies of the financial documents for previous financial years had been moved to the archives, which was not affected by the fire. Similarly all old files in the Central Registry had been moved to the archives. Information of the staff in service has been digitalized and is safely kept on servers, which are not in the Main Building.

The financial documents for the Financial Year 2019/2020 are currently being audited by the Auditor General and were safely evacuated from the Main Building.

With the move to the Integrated Finance Management System (IFMS) all financial transactions of the University are automatically backed up electronically at the Ministry of Finance, Planning and Economic Development.

In addition, with the recent financial decentralization at the University, a considerable percentage of the financial documents are kept in the Colleges and administrative Units. All revenue collection including student fees, rent and other payments are received directly by URA, which then transfers the money to the consolidated fund.

All payments are similarly made through the IFMS. Management therefore does not keep cash in offices as alleged by some social media reports and there was no loss of cash in the fire.

Documents from the offices of the Vice Chancellor, the Deputy Vice Chancellor (F&A) and some of the documents in the Office of the University Secretary which were not razed in the fire were also evacuated.

Management is compiling the value of all property lost in the fire, based on the University Inventory and Board of Survey report, which was concluded at the end of August 2020.

All students related data including academic records is stored digitally on the Academic Information Management System (AIMS), which is also backed up at the Ministry of Science and Technology. Hard copy student information is kept in the Senate Building.

The First Lady and Minister of Education and Sports, Hon. Janet Kataaha Museveni, accompanied by the Minister of State for Higher Education and the Permanent Secretary visited Makerere University yesterday and addressed members of Council and Management and pledged Government support to restore the building.

During the night of the fire, H.E. The President called the Vice-Chancellor several times requesting for an update on the efforts to extinguish the fire and on the causes of the fire. I thank H.E. The President and the First Lady and Minister of Education and Sports for the concern they have shown during this difficult time. I similarly thank the Chancellor, Chairperson and Vice Chairperson of Council as well as other members of Council who responded immediately after this most unfortunate incident unfolded.

This incident has reminded us about two important issues, the need to insure our installations and the need to install fire hydrants on campus. At the height of fires at educational institutions, Council decided that the University should insure all key installations.

Due to financial constraints, Council however decided to begin with health insurance for staff and budget for insurance of buildings in the subsequent year. Management requested the Chief Government Valuer made a valuation of the major installations, including the Main Building (UGX 15,434,782,500), the Main Library (UGX 21,569,690,854) and the Senate Building (UGX 20,508,533,625) and submitted a report on 29th November 2019, for purposes of insurance.

At this time of receiving the report the budget for the next financial year had already been completed.

Management is in the process of negotiating with the Ministry of Finance, Planning and Economic Development for provision of funds for insurance of these installations.

For several years, Management has budgeted for overhaul of the University’s obsolete underground water reticulation system, including installation of fire hydrants, but no money has been approved in the budgets for this purpose. Management will continue engaging Government on this issue.

The University is now faced with the task of restoring this iconic building in time for the centenary celebrations due in 2022.

Management will engage Government and other stakeholders on this very important task. We are grateful to our alumni and well-wishers from around the globe for their show of sympathy and for the desire to contribute to the restoration of the building. We will inform all stakeholders about accounts to which to send their contributions when this is finalized.

Plans are under way to relocate the offices previously in the Main Building as soon as possible. It is proposed that CTF 2 will be used for this purpose.

Arrangements are under way to receive the final year students as directed by Government. Final year medical students will resume studies for the second semester on 3rd October 2020 and end on 28th November 2020. The rest of the final year undergraduate students and the graduate students will report on 17th October 2020 and end on12th December 2020. Arrangements are under way to receive the students. It is proposed that students who were ordinarily residing in halls of residence will be admitted in the halls of residence and the non-residents will continue residing off campus. This is because the capacity of the halls of residence cannot accommodate all of them. Announcements will be made to all the students in good time to allow foreign students undergo quarantine if necessary.

After receipt of clearance by the National Council for Higher Education (NCHE), teaching for the rest of the students will commence on 15th October 2020. Arrangements for this are under way.