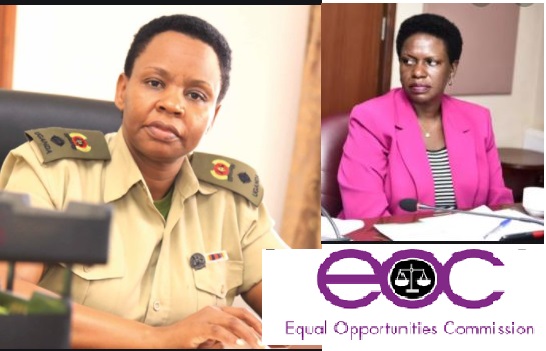 Mrs. Sylvia Muwebwa Ntambi, the  Chairperson of Equal opportunities Commission (EOC), in languishing in coolers after she was charged with corruption before the Anti-corruption Court in Kololo on Tuesday.

The head of the State House Anti Corruption  Lt. Col. Edith Nakalema confirmed Ntambi’s woes saying that; “Yes, the Chairperson Equal Opportunities Commission has been charged with conspiracy to defraud the government. Details about the case can be found in the charge sheet,” Lt Col Nakalema said on Tuesday.

Ntambi is accused of allegedly turning a blind eye to unethical practices that have seen staff polarized along tribal lines, which has created a toxic working environment.

The allegations are contained in a petition by a whistleblower to President Museveni only identified as Kasamba,  which details cases of unfair staff dismissal, irregular interdiction, resignations and refusal to renew staff contracts amid allegations of tribalism, all being perpetrated under Ntambi’s watchful eye.

In one instance, the petitioner indicates that in March this year, she travelled to New York for the Session of the UN Commission on the Status of Women (CSW) and was paid Shs36.8m for 17 days yet the meeting was for 13 days.

The petitioner also alleges that between April 6 and April 16, she reportedly received Shs27.2m for 12 days of a benchmarking trip in Sweden and Finland, which according to a whistleblower did not take place.

There was also payment in lieu of leave equivalent to Shs13.2million. These payments, according to a whistleblower, have remained unrecovered and unaccounted for since Financial Year 2016/17 to date “due to her domineering instructions”.

According to Kasamba, his failure to join a clique led by Ntambi was the genesis of his troubles, since he was deliberately isolated and openly fought.

He recalls when he was still new at the commission, he received a phone call from the Principal investigation Officer only identified as Kkooza, who was in need of a vehicle to be used by the chairperson on her private duties.

Kasamba, who doubled as the commission’s transport officer explains that he rejected the request because he had only one vehicle which was also needed by a team going to the field on official duties. Because of this, the Principal Investigation Officer, alleged to be Ntambi’s confidant, told him that he would be punished for insubordination and that was when his being witch-hunted started.

The office of the Director of Public Prosecutions contends that between July 2018 and April 2019, Ntambi neglected her duty of directing the affairs and administration of the commission, thereby leading to gross mismanagement of the Commission’s funds.

Ntambi is charged together with other officers of the Commission among them; Agnes Inid Kamahoro a senior personal secretary, Moses Mugabe a senior evaluation and monitoring officer, Mujuni Mpitsi a secretary to the commission, Harriet Byangire a senior accountant and Bonnie Kwesiga an accounts assistant.