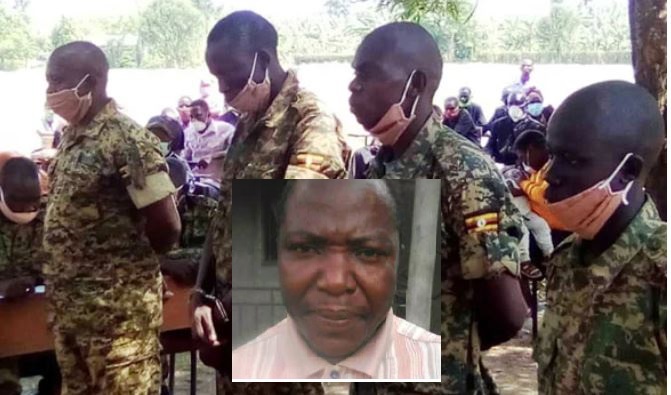 The  General Court Martial has charged four Uganda People’s Defence Forces (UPDF) soldiers with the murder of Benon Nsimenta, a lay reader who was shot dead in the wee hours of June 24 at Hima, in Kasese District.

Nsimenta’s widow, Allen Musimenta, told  the media on June 24 that she was with her husband riding on his motorcycle at around 7:00Am heading to their garden in Kanamba village, Karusandara sub-county, when they met soldiers at Karungibati along Hima-Kasese road, one of whom shot her husband at close range, killing him instantly.

The four soldiers identified as Pte Abraham Lokwap, Pte Jackson Nyero, Pte Joel Otim and Lt. Talent Akampurira, all attached to the 6th Mountain Brigade Battalion (Hima, Kasese) were on Monday arraigned before the Mountain Division of the court martial chaired by Col. Felix Nyero at Karusandara in Kasese District. They pleaded guilty to the offence of murder.

Prosecution presented three witnesses who included Musimenta, who is the widow, and Doctor Jonathan Kateremwa who conducted Nsimenta’s autopsy.

The UPDF had however revealed last week in statement that Nsimenta was hit by a stray bullet, a version Musimenta dismissed.

Nsimenta’s death adds to the rising causality numbers of people who have died during the COVID-19 lockdown as a result of violence being meted unto them by security personnel.

This comes shortly after the UPDF arrested three of their soldiers who were filmed brutalizing a civilian on Thursday last week, in Kisasi,  a Kampala suburb.

In the said video, three UPDF soldiers are seen kicking and flogging man who is lying on the ground, pleading with them for mercy.