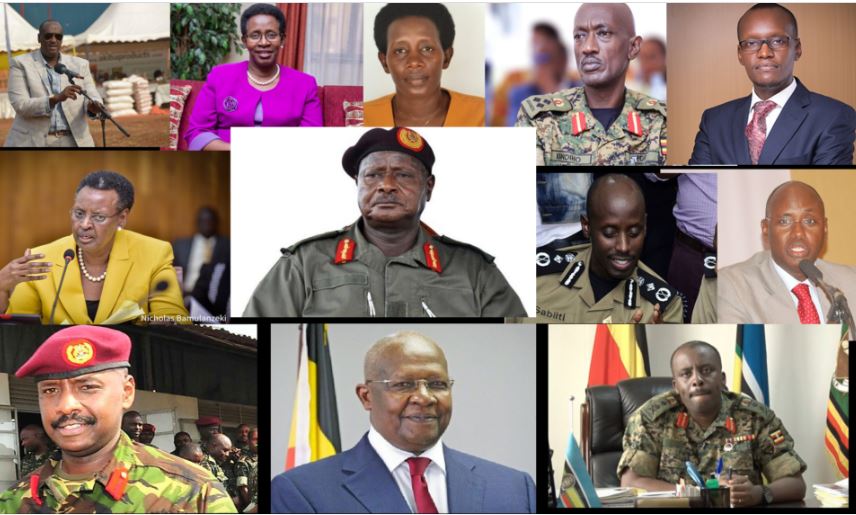 It should be noted that the National Resistance Movement (NRM) has been at the helm of Ugandan politics since 1986, which s implies that President Museveni has distinguished himself as the only leader in conjunction with his closest family members who include brothers, children, in-laws, and cousins referred to as the ‘deep state’ in the running of the Republic of Uganda.

He is also referred to as the Commander in Chief of all Defense forces, The Fountain of Honor as well as the Head of all Operations in Uganda.  But here below is how his family members, relatives, proxies and colleagues have taken over control of  the country?

He is the immediate brother of President Museveni and heads the Operation Wealth Creation which received over 300 billion shillings as per budget allocation 2019/2020 FY. He also acts as the Chief visionary of all Factories and Industries in Uganda and has shares in over 400 factories constructed in Namunkekera-Nakaseke District.

He is the Vice President Defacto that is why we wonder if Edward Sekandi is still in charge as social media digs deeper.

She is the First lady of Uganda and the Minister of Education, hence being known in the cabinet for being tenacious as she is so influential in the decision making of the President, especially about Cabinet appointments.

She heads the Uganda Women Support Organisation and The Aids Support Organisation, which receive heavy funding, especially from the Scandinavian countries through the ministry of health, thus the appointment of Diana Atwine as the Permanent Secretary to tap on that money and facilitating the 2021 elections campaigns.

He is the First son and advisor to the President on Special Operations. He has attained all the Military ranks in a period of 10 years and refers to himself as the Last Muchwezi. He is the Defacto coordinator of all Security Agencies and in custody of all tapping machines that monitor communications such as phone calls, WhatsApp messages and the jamming of the network thus referred to as Special Operations.

He is the longest-serving Foreign Affairs Minister in the history of Uganda and some parts of East Africa and features as the wealthiest Ugandan in the 21st century owning arcades, apartments, malls, and ENHAS Cargo Company, that has handled Cargo at Entebbe Airport since the 1990s and collects over 20 billion weekly.

He married a cousin to Janet Kataha the late Jeniffer Nankunda and he is a Father-in-law to Gen. Muhoozi Kainerugaba, who married Charlotte, a twin sister to Shatsi Musherure. Remember Kutesa of recent just appointed his daughter Ishta Asiimwe the first-ever envoy of Israel to Uganda to contest for the Mawogola MP seat.

He is the Chief of Defense Forces (CDF) of Uganda, a very distinguished officer and a First Cousin to Janet Kataha all from the Omuyombo clan. His young brother Col. Mbeine Julius heads Counter-Terrorism at the Chieftaincy of Military Intelligence (CMI), a position meant to traumatize opposition figures like Zaake Francis who was tortured and traumatized, among other many Ugandans rotting in the CMI dungeons. He also doubles as the Head of Finance in CMI.

He is the first cousin to Janet Museveni and a former minister for Veteran Affairs but now the Minister of Agriculture  and Animal Husbandry to tap on the Locusts funds. He and his son Mwine Mpaka have made history for having father and son in parliament courtesy of Museveni regime.

When he was at the helm of the Directorate of Finance in UPDF, he and Ahamed Kashilingi swindled all the cash close to 900 billion shillings and burnt all the records in the famous Basiima House. This saw Kashilingi almost being buried and yet Rwamirama is still fostering the 50-year rule project.

He is the first in law and husband to the most beloved daughter Natasha who reportedly used a presidential Jet to go for delivery in Germany on taxpayers’ money. He is a partner in Kiryowa Kiwanuka Advocates law firm thus being a lawyer to the president and NRM and one might wonder how much money is spent on such cases.

He is the Defacto Attorney General and if any claim of money from the government doesn’t go through him, it is always a myth that you will receive such payment. That is the reason why Basajabalaba had to cough over 149 billion as his compensation from the sold-off markets since he did not authorize the payment.

He is also a board member to over 10 government parastatals such as the Oil and Gas Board of Directors and a leading broker of the Tanga and Hoima Oil Pipeline to protect the Oil interests. No wonder some sources say that oil is already sold which adds up to the strategic deployment of Museveni.

He is the Chief Military Intelligence (CMI) commander and a First cousin to Janet Museveni. He has power to neutralise any opposition leader in the country. Remember the Arua Saga, they shot Yasin Kawuma(RIP) and their target  People Power movement leader Bobi Wine and this was done under the supervision of Brigadier CK Asiimwe, Director JAAT.

As a spymaster, he should be in office gathering intelligence but he is always seen in Kiseka Market ordering the army to torment  protesters.

This is the same fella who has been at the forefront spoiling Uganda’s relationship between Rwanda and Uganda through torturing innocent people like Rene Rutagungira of Rwandan origin and others who are being arrested and extorted in the CMI go downs. When will the Karamojong, Acholis, Westnilers like Ochogo or Odokonyoro, or even a Muganda like Sekitoleko hold such positions?

His biological brother Adonia Ayebare is the Permanent Representative to the UN in Uganda and is the head of Lobbying donations in the whole of Europe and also buying Military software and intelligence gadgets from Israel and Russia.

He is the Defacto Inspector General of Police and his Father Majenyi and Kataha, the father to Janet Museveni were first cousins. They shifted from Omungyenyi Rubaare and relocated to Kashari District.

As young as he is, he has attained all the Military ranks in a period of 10 years. He was brought to supplement Kandiho and Muhoozi in embarrassing Ugandans especially the Opposition.

She grew up in Museveni’s house as an adopted child and we are yet to confirm the mother. She is the head of the Mineral Protection Unit and Head of Interpol at Entebbe Airport. She is the first police officer in history to have two positions and was recently questioned by Hon. Sekikubo on how she attained both positions in Public Service as many Ugandans are hungry just to sweep in such offices.

Reliably we are informed that she is stronger than Ochola and that at her Rank of Superintendent of Police, she has immersed a lot of wealth and has apartments in Muyenga, Munyonyo and other suburbs of Kampala and all proceeds from Gold mines of Mubende and Karamoja go through her hands.

They are also adopted children of President Museveni through Luweero Triangle. Atwine is the Personal Doctor to the President who was later appointed the Permanent Secretary Ministry of Health and the essence was to control the donor money to be used in the 2021 election campaigns.

What amuses us is that the criteria for one to become a Permanent Secretary is well elaborated but from a doctor to that position raises our eyebrows.

Many controversies, corruption scandals in this COVID-19 pandemic have occurred under her watch and what’s amazing is that in just 2 years, she is said to have magnificent apartments on several hills in Kampala.

Atwine’s biological Sister Florence Kabibi, a wife to the Minister Frank Tumwebaze (referred to by Tamale Mirundi as Mafia), who was posted in the Ministry of Labor and Gender to collect revenue from labor exporting Companies and to divert the youth Fund to both Muhoozi Project and 2021 elections. In a period of close to 5 years, he is worth 500 billion shillings.

The list is endless but those are the ones being referred to as the inner state comprised of Family Members to run the state affairs behind the scenes. This is a complete Family tree managing this country and a big question goes to you fellow Ugandans, some may not be people power like me, when shall we have the likes from Karamoja, Kitgum, Pader, Maracha, Zombo, Arua and other areas of Central Uganda such as Kalungu at the helm of this country? No wonder that is why Kasirye Gwanga swore never to salute Gen. Muhoozi because he regarded this country is a hereditary monarchy.