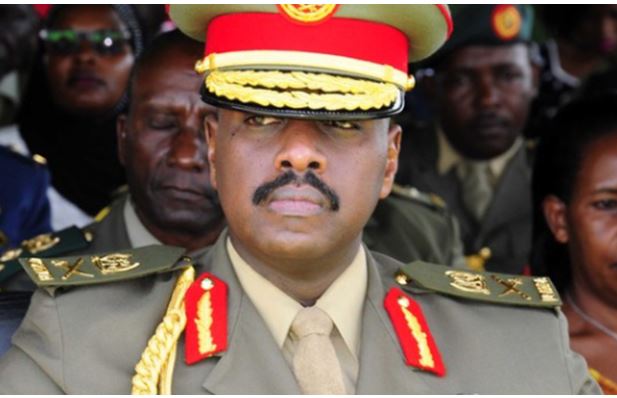 The Presidential adviser on Special Operations Lt. Gen. Muhoozi Kainerugaba has revealed that Uganda and Rwanda are one and the same and that no one can attempt to separate them.

Gen. Muhoozi made the revelation in a tweet on Thursday when he tweeted thus; “The relationship between Uganda and Rwanda is beyond normal state to state relations. We are one family!”

He added that “No one can break the historical bonds because they are from Almighty God! We shall always be brothers and sisters. Our two great leaders shall repair the relationship.”

Muhoozi thereafter accompanied the tweet with picture of Presidents Yoweri Museveni and Paul Kagame seated together with First Ladies Janet Museveni and Jeanette Kagame, with him (Muhhozi) and other people in the background, among them Independent Magazine boss Andrew Mwenda.

However, this comes at a time when Uganda and Rwanda are at loggerheads ever since the latter closed her borders in February last year.

Rwanda closed the borders after accusing the Ugandan government of allegedly facilitating and harboring Rwandan dissidents and rebels working towards the overthrow of Kagame’s government.

Kigali also accused the government in Kampala of illegally detaining several Rwandans at various detention centres in the country, especially by the Chieftaincy of Military Intelligence (CMI).

Although the Ugandan government denied the allegations, officials have since released several Rwandans who had been detained in Uganda and deported them to Rwanda.

But even then, efforts between Presidents Museveni and Kagame to reach an amicable position over the contentious matter have since hit a snag despite the several meetings they have held, including the one in Angola and at the Uganda-Rwanda Gatuna border in February 2020.