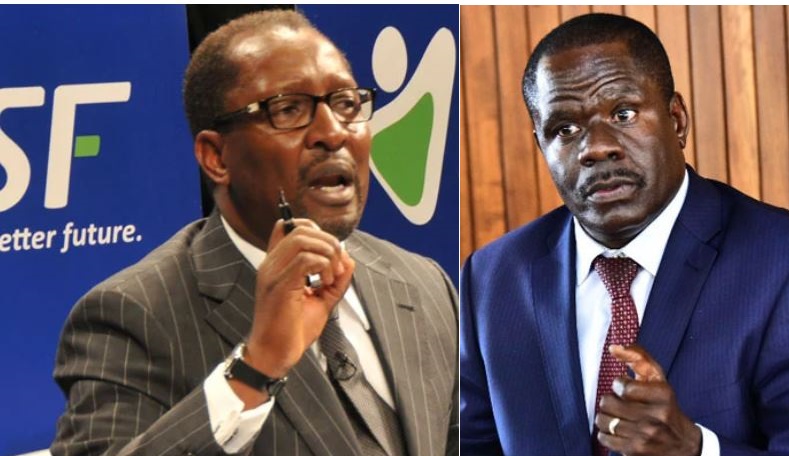 THE RIGHT POSITION ON THE PROPOSED MIDTERM ACCESS BY NSSF SAVERS

1.Fellow citizens in the next few days, and as guided by the Right Hon Speaker, Parliament has to pronounce itself on the question of allowing savers under NSSF a small part of their savings.

We are not talking of these savers accessing government or someone else’s money but their own money earned in sweat and blood. We are not even talking of them accessing all but a very small portion of their money, actually as small as less than 20% of it.

And again we are not saying that everyone saving with NSSF shall automatically qualify for this money but those who wish to and who must be 45 years of age and above or  have saved for at least for 10 years if they are not yet 45 years of age.

2. Our analysis shows that as of March 31, 2020, NSSF had a total member portfolio of 11.4 trillion. There were about 150,000 members between 45 and 55 of age and holding approximately Shs3.7 trillion, 20% of which amounts to Shs740 billion. Subjecting this to another condition “of at least 10 years of savings”,  reduces the exposure to almost that number almost half, i.e about Shs370 billion.

The Fund can carry out an actuarial study now and handle this. The Audit Report of December 2019 showed that if the Fund was to pay out 20% of members of 45years, it would spend 300bn, which is affordable as the Fund collects over 100bn a month.

3. To avoid the Fund running out of money we have further proposed many other safeguards that include liquidity or availability of cash with the Fund and the technical veto by the management of the Fund in accordance to guidelines approved by the Board and the responsible government ministry.

4. The processing of an amendment to the law to make this possible started long before our current COVID19  challenge and our cry now is that this can nolonger wait.

5. However, there is now a misleading, irregular, alarmist, dishonest and unprofessional letter by the Managing Director of the NSSF Board, Richard Byarugaba, written to the Minister of Finance Planning and Economic Development, against the same.

In this letter and in an obvious attempt to negatively bias decision, Mr Byarugaba deliberately premises his analysis on a wrong assumption that our proposal for midterm access is for an unconditional  20% drawn down at a go on the about 13 Trillion portfolio of the Fund translating to about 2.6Trillion.

6. Obviously such a reckless irresponsible proposition would be untenable due to lack of liquidity and would also lead to serious ramifications both to the members and  the financial systems as ably and correctly articulated in his analysis. However that misleading approach is not what our midterm proposal seeks.

Our midterm proposal has considered this especially the numbers regarding savers  45 years and above of who have saved for at least 10 years as already analysed.

We note that Mr. Byarugaba’s analysis deliberately ignores  this, and the  previous discussions, concessions and proposed safeguards relating to the proposed midterm access. Mr. Byarugaba even couldn’t bother to consult the Board given that his controversial stance now appears to contradict the official position of the Board.

8. In our case as Uganda, under the current National Social Security Fund Act, 1985, we have only 5 levels of benefits ( i.e age, withdrawal, invalidity, emigration grant, survivors’) that  translate to only 3 ( ie age, invalidity and survivors’) under the ILO standard.

The implication of this is that we are still to actualize the remaining 6 benefits i.e medical care; sickness benefit; unemployment benefit; employment injury benefit; family benefit and maternity benefit.

9. Consequently, our proposal for midterm access, and to allow the management and board of NSSF flexibility and liberty in introducing new lines of benefits, is to allow a window of opportunity within the scope of the ILO standard taking into consideration the liquidity of the Fund and prevailing national circumstances.

Anyone arguing that this shall erode the fund is either more concerned with servicing economic interests or isn’t wellgrounded in the core and purpose of the Fund.

Having a monument and a powerful NSSF with an ever increasing financial muscle without this translating  into the best social security of members is handing over a hitherto social security institute to economic hitmen.

Lies And Myths By Economic Hitmen

10. As we address the social security interests of workers we continue to encounter and deal with lies and myths peddled by economic hitmen whose major interest is to grap a chuck of the workers money.

11. As of now we are still faced with another serious controversy and standoff that has led to the two Parliamentary committees handling this bill to be stuck with the report and so we can’t proceed to the 2nd and 3rd reading. The controversy arose from what the government had proposed to cure the ‘mischief ‘ of the balance between the economic and social security interests.

13. However, that transfer created a challenge. Whereas the ministry responsible for finance could handle the economic  and investment imperatives of the Fund, that are actually secondary and consequential, that ministry has been incompetent in managing the social security aspects.

14. The solution was to bring on board the ministry responsible for labour that houses social protection world over. There were 3 options to do this: i) Leave the Fund under finance but transfer the department of labour to finance so you create the ministry of state for labour under MoFPED; ii) Create a dual supervision where both ministries, finance( MoFED) and labour ( MGL&SD) work in a guided way; iii). Revert the Fund to the ministry of Gender, Labour and Social Development.

15. I did write to H. E the president giving the 3 scenarios to resolve the challenge. However, H.E the President seems to have not taken my proposal and the situation persisted.

16. However in proposing the amendment,  cabinet seems to have moved and proposed the 2nd scenario as analysed above. As workers we supported that position as that would resolve the challenge of balancing the economic and social protection interests just like it is worldwide.

17. However, as Parliament was concluding the process in the Committee the economic interests lobbied their way and reached out to H.E President who wrote to Parliament guiding that the current situation should remain where the Fund is exclusively under ministry of Finance,  Planning and Economic Development arguing that dual supervision would create confusion. We failed to see the confusion because the mandates of the two ministries were to be outlined by law and indeed this is not the first time or the only entity with such dual supervision.

18. The approach  of leaving NSSF exclusively under MoFED  is dangerous, against social security interests of workers and is being propagated by economic interests at the expense of workers. It is even unnecessary because we now have a supervisory entity, the Uganda Retirement Benefits Regulatory Authority (URBRA), and so the situation that pertained in the past leading to the transfer of the Fund doesn’t pertain now.

19. As workers, economic interests have blocked us from having our arguments be understood by the President.

Our prayer, has always been that just as Solomon used wisdom to decipher the right mother from the fake one in the bible, God shall grant wisdom to our President to discern that workers and the ministry responsible for labour are the legitimate mothers of social protection.

A Call For Zeal And Action by NSSF Savers

20. Consequently, we alert the savers to follow this debate keenly and where necessary be ready to come and join us ( i.e Members of Parliament for Workers, leaders of the National Organisation of Trade Unions (NOTU), Central Organisation of Free Trade Unions (COFTU) and all National Labour Unions, and Workers representatives to the NSSF Board) to camp at Parliament and at the  NSSF offices at Workers House  should these negative interests continue with their callous attempts to block or delay the process.

MEMBER OF PARLIAMENT FOR WORKERS