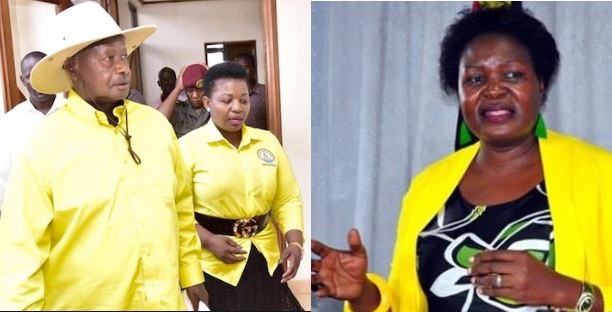 One of the key matters that were expected to be handled was the approval of the new bureaucrats President Yoweri Museveni unveiled during the last week session, who are set to run the official work at party headquarters along Plot 10 Kyaddondo Road, in Nakasero.

But  the meeting was unable to progress on that agenda item of approving the new party secretariat bosses after Government Chief Whip (GCW) Ruth Nankabirwa, renowned for having a cold war with powerful SG Kasule Lumumba, raised strong objections disputing the suitability of some of the new officials meant to take up salaried jobs at Kyaddondo.

She argued that she has credible intelligence indicating that some of those nominees already hold elective positions in the party structures and even have ambitions to run for elective office in 2021.

Nankabirwa cautioned that CEC takes more time to vet them more as regards their commitment and availability to do that full-time work required of them at the secretariat which is naturally going to be very busy during this electoral period.

In a related development, Gen. Jim Muhwezi, who represents veterans in CEC, has reportedly been lobbying fellow CEC members to veto some of the names that President Museveni says were actually presented and suggested to him by the SG Kasule Lumumba for his ratification.

Muhwezi has been telling fellow CEC members that a man like Emmanuel Ddombo, who was proposed to serve as Director Communications at Kyadondo, is a very poisonous politician with a track record of maliciously spearheading humiliation and eventual censuring of senior NRM Ministers during the 6th Parliament.

That Ddombo’s politics has always rotated around spoiling names of senior party leaders. He references on his censure in the 1990s and that of then investments Minister Sam Kutesa as one of the many mischievous acts the then youthful Ddombo spearheaded during his days in the 6th Parliament.

The duo was censured on allegations of corruption and being the key mover of those censure motions, Ddombo is one man both Kutesa and Muhwezi have never forgiven. In lobbying fellow CEC members for a veto, Muhwezi hasn’t disguised his historical resentment towards Ddombo.

During the Saturday CEC meeting in Entebbe State House, Muhwezi didn’t speak but was among those who visibly nodded in approval as GCW Nankabirwa punched holes in the list of the proposed nominees.

Yet there are reports that Kasamba, in whose abilities Lumumba greatly believes, is also having his eyes on the local elective politics in Kakuto which he previously represented as MP.

Such greed among EALA MPs isn’t something that Gen Museveni is learning about for the first time. Only a few days ago, he was busy lobbying for Rose Akol, the former interior Minister and MP Bukedea District to become the new EALA Commissioner on behalf of Uganda. She is replacing Fred Mukasa Mbidde of DP.

Museveni was doing all this to entice Akol from manifesting political greed by returning to the trenches of Bukedea where she intended to maliciously run against his blue eyed girl Anita Among formerly of the FDC party.

Among is vying for NRM flag bearer, something Akol wanted to frustrate, prompting Museveni to sit the two ladies down while telling them “you are both my good daughters please stop that cheap politics of fighting each other.”

There is also DP’s Mukasa Mbidde vying for Masaka Municipality yet his term at EALA runs up to 2022. The same applies to Susan Nakawuki who, despite being a sitting EALA MP, is already campaigning to become MP Mawokota South in Mpigi district.

So, whereas Nankabirwa wasn’t specific on those she suspects might be interested in elective politics which naturally constrains their efficiency as Directors at Kyaddondo, her submission was perceived by some at the meeting as a reference to the possibility of SG Lumumba protégé Mathias Kasamba having interest in the local politics of Kakuto, in Kyotera district.

SG Lumumba, who stands accused of originally frolicking with Ddombo in PAFO and is the one Gen Museveni says originated the list of the new appointees for the secretariat, was naturally present in the Saturday meeting and tried to counter Nankabirwa’s objections by saying the nominees were adequately vetted and are suitable for ratification by CEC but the chairman (YK Museveni) deflated her views when he suggested the matter gets stood over for more consultations, so that the ultimate decision is taken on Wednesday when CEC members are to re-convene for another session.

Since becoming GCW, a position Lumumba previously occupied, Nankabirwa hasn’t been on the best terms with the political giant from Bugiri. The supporters of the two powerful ladies have always treated each other with suspicion and apprehension.

The successful objection by Nankabirwa has resulted into CEC not taking a final decision on the nominees for the Kyaddondo jobs, implying their job offers will continue to hang in balance faced with a clearly very uncertain future.

The other sticking issue CEC was unable to resolve during the Saturday session related to the method to be used to arrive at the flag bearers for the party for next year’s scientific elections.

Members considered a professional opinion tendered by a team comprised of lawyers and medical scientists guiding on the best way forward. The report recommended that the old party structures, basically the 30 party leaders per village, be used to elect party flag bearers as the party buys time to renew its structures after 6 months.

This is meant to save on the scarce resources while minimizing exposure to COVID-related risks. Sources say that as he adjourned the meeting in Entebbe State House, Gen Museveni invited CEC members to go and reflect on all these proposals and return on Wednesday prepared to take a final decision on each one of them.

“Don’t be surprised if those nominees are blocked as opposed to being approved to occupy offices at Kyaddondo because many are perceiving them as Lumumba’s people, yet many of us aren’t comfortable with the SG becoming very strong,” said one of the CEC members, who preferred anonymity.

In a related development, there are widespread fears that party EC Chairman Tanga Odoi might explode anytime and return to his old habits of fighting the SG soon because he says he won’t allow being sidelined from being the main man on the management of the voters registers to determine who participates in electing flag bearers for the party or doesn’t.