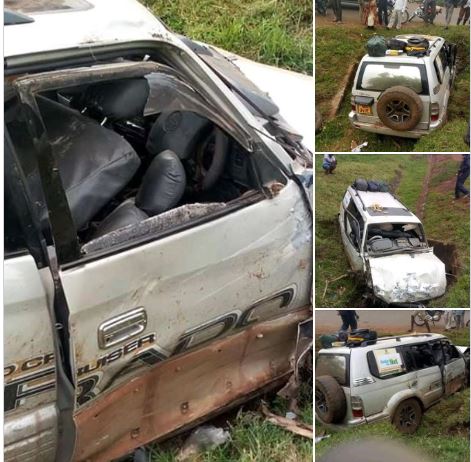 Shock has engulfed the staff of the Ministry of Health after three of their officials got involved in a tragic accident on Sunday, which left two of them dead and one critically injured.

According to eyewitness, two officials attached to the ongoing Under The Net (MNET) program perished in the terrible road accident after the vehicle they were traveling in, a Prado TX registration number UAM 049E lost control, swerved off the road and rolled, before ramming into a boulder along the Kapchorwa–Mbale road.

According to reports, the vehicle, the Ministry of Health staff were returning from Buikwe district where they were distributing mosquito nets when the driver lost control, forcing the vehicle to overturn.

The deceased have since been identified as Isaac Mukasa, from Central Uganda and Timothy Trevor Dairo from Soroti District, while the third was only identified as Ronald, a Laboratory Technician.

The two had been deployed by the ministry of health to distribute nets in Bukwo district. Their bodies were taken to Kapchorwa municipal mortuary for postmortem.

Following the tragedy, the traffic police in Sipi sub-region has commenced investigations into the cause and preparations for burial of the deceased are already underway.

The Ministry of Health is yet to issue a statement about this unfortunate incident.