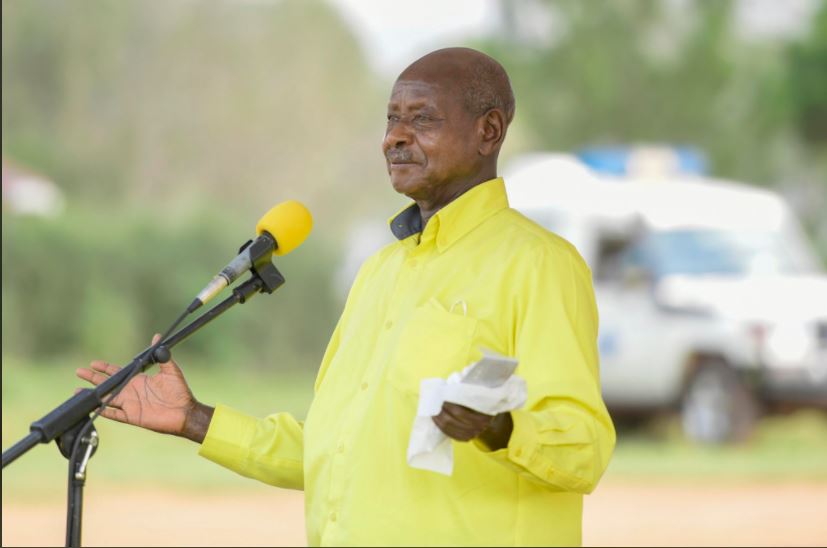 President Yoweri Kaguta Museveni has warned all his relatives, members of the First Family and government officials to desist from using his name when campaigning for political office.

Museveni made these shortly after meeting political leaders in Ssembabule, Isingiro, Kiruhura, Kazo and Mbarara Districts  who were warring over who becomes the flag bearers for the National Resistance Movement (NRM) ahead of the 2021 general election.

The President issued the warning in a missive he wrote on social media on Friday, 11 September 2020, in which he stated thus;

“I spent the day in Mbarara and Sembabule districts, where I met NRM parliamentary aspirants and other officials from the two districts plus Isingiro, Kirihura and Kazo.

It is important for those seeking leadership positions in the NRM to appreciate our ideology. People are fighting hard to go to Parliament because MPs unilaterally increased their salaries. They earn more than our scientists and other critical professionals.

I tried to discourage them but they insisted. Now, people want to leave their jobs and go to Parliament to earn high salaries. And yet this should not be the motivation to seek parliamentary seats, it should be about serving their people.

Politics is working for the people, to help them get out of poverty and solve their problems. It should not be about you the contestant escaping from poverty yourself.

For those who were violent in the party primaries, including those who masterminded it, we shall arrest and prosecute them. I have spoken to families of those whose loved ones were killed in these incidents, we shall see how to support them.

On the issue of my relatives getting involved in politics. Read Matthew 12: 46-50. Jesus says His brothers and mother were those who do the will of His Father in Heaven.

My name should not come up when my biological relatives are contesting. For me, like Jesus, my relatives are all and any NRM member who does the right thing according to the party constitution.

However, I will table in the party CEC the issue of high-ranking party officials backing their relatives to fight other NRM contenders. That’s not leadership. You should not get involved in supporting your relative and disadvantaging other contenders.

About rigging and fraud. I have given all those who did it a three-day amnesty starting today to come clean. If they do not heed this call, we shall announce the true results and instead prosecute those fraudsters.

In Kiruhura, for example, we have verified results from 151 villages and we are left with 60 other villages. We shall make our independent conclusions. This is what we shall do in all districts with problems. And for those villages which did not get to vote, they will vote.

There were some party members who have been supporting other parties, yet they came to stand on the NRM ticket to be MPs. These must tell us where they belong. Also, NRM district chairpersons should be neutral in these party primaries. All in all, we must have order in the party. Thank you.”