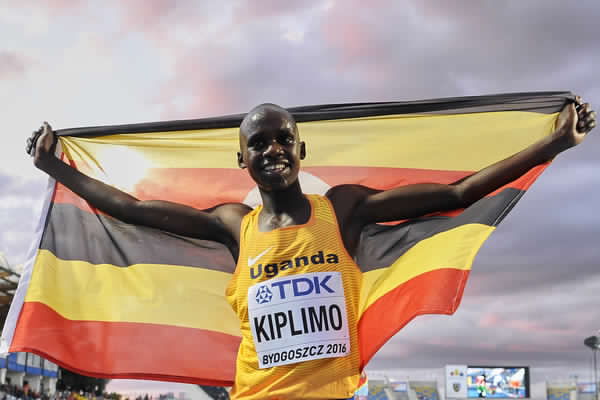 Inspired by Joshua Cheptegei’s 5,000m world record performance in Paris a couple of weeks ago, Jacob Kiplimo defied fitness doubts to win the 5,000m at the 59th Ostrava Golden Spike in the Czech Republic.

He won in a meet record time of 12:48:63. It was an incredible recovery from Kiplimo, who looked gone on halfway.

In Manchester, Kiplimo hit the front early and never looked back as he came home in a time of 27:31 – the fourth-fastest time for 10km on the roads last year.

However, in Ostrava, Kiplimo had to find his way to the front from third place in style, closing the gap with leader Barega before outsprinting him in the final 50m.

The World Athletics Continental Tour Gold meeting earlier scheduled for May and postponed because of the coronavirus pandemic attracted some of the biggest names in the world athletics.

Before the race, Uganda Athletics Federation (UAF) president Dominic Otuchet had predicted a good race for Kiplimo at the Mestsky Stadium.

“Kiplimo has been training in Kwen and Kapchorwa; I know he had an injury after the Manchester run, but that was last year. He recovered well from the injury and I expect him to perform well,” Otuchet said before the race.

“I know he is an athlete that can spring surprises when at his best. He doesn’t fear competition- though his best competition is the longer 10000m race, I know he will go for it and I expect him to perform well,” Otuchet stated.

Kiplimo drew inspiration from World Championship record holder Joshua Cheptegei who smashed the 5000m record that had stood for 16 years, running the 12.5 laps of the Louis II stadium in a time of 12:35.36 a few weeks back.

However, his teammate Winnie Nanyondo underperformed as she finished 9th  in the 1,500m race won by Faith Kipyegon.  Kipyegon who is unbeaten this season crossed the line in a new Meet Record of 3:5005.

Nanyondo was fresh from competing in the Diamond League where she crossed the finish line in 8th with a season’s best of 2:36.54 in the 800m race.

Who Is Jacob Kiplimo?

Jacob Kiplimo (born 14 November 2000) is a Ugandan long-distance runner who competes in track running events. He represented his country at the 2016 Summer Olympics.

A member of the Sebei ethnic group, he grew up in Bukwo on Mount Elgon, living at high altitude. At the age of fifteen he won the 10,000 metres bronze medal at the 2016 IAAF World U20 Championships behind fellow East Africans Rodgers Kwemoi and Aron Kifle. Of as much importance as that placing was his time of 13:24:40 minutes for the 5000 metres in Rome that May. That was enough to reach the Olympic standard and gain selection for Uganda at the 2016 Summer Olympics. As a result, he became the youngest ever Olympian for Uganda.

Prior to the 2016 Rio Olympics, he improved his 5000 m best further to 13:19.54 minutes. The youngest entrant to the competition he ran in the Olympic heats only, recording a time of 13:30.40 minutes for eleventh in his race.. He is the youngest ever competitor for Uganda at the Olympic Games, with the age of 15.

At age 16, Jacob Kiplimo produced a performance of a lifetime to win gold in the men’s U20 race at the 2017 IAAF World Cross Country Championships in Kampala, the country’s first ever gold medal at a World Cross, covering the 8 km course in 22:40 minutes.

At the Ugandan Cross Country Championships on 16 Feb 2019 in Tororo, Kiplomo defeated Joshua Cheptegei by both placing first and second respectively. In the men’s senior race over 10 km, Kiplomo won by an 11-second lead over the 10000 m world championship runner up.

At the 2019 IAAF World Cross Country Championships in Aarhus, Denmark, Kiplimo finished second in the senior men’s race 4 seconds after Joshua Cheptegei‘s winning time of 31:40. He won the gold medal in the teams ranking with Cheptegei from Uganda.

Kiplimo did not run in the 10,000 metres at the 2019 World Championships in Doha, because of an injury.

On 31. December 2019, Kiplimo ran the San Silvestre de Sao Paulo 15 km road race in Sao Paulo. He was beaten by Kibiwott Kandie on the finish line, Kandie won in 42:59 a new course record. Kiplimo finished in 43:00.