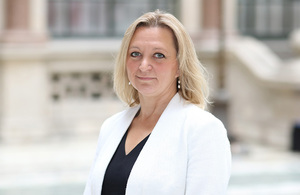 Ms Kate Airey OBE has been appointed British High Commissioner to the Republic of Uganda in succession to Mr Peter West CMG who will be retiring from the Diplomatic Service. Ms Airey will take up her appointment during December 2020.

Kate Airey was appointed as the British High Commissioner to the Republic of Namibia in November 2017, and started in January 2018.

Kate joined the Foreign & Commonwealth Office in 2005, where her career has focused on Africa, including roles in London as Africa Energy Adviser, Lead on Strategy, and Lead on Prosperity (2005-2014). She has held postings overseas in Abuja, Nigeria (2007-2010) and Freetown, Sierra Leone (2014). Kate also led the 2014/2015 Ebola crisis both in Freetown as Deputy Head of the UK response and in London as Head of the FCO Ebola Task Force, coordinating the UK end of the Foreign Policy response. Before moving onto Namibia, Kate was Head of the Nigeria Whitehall Unit (2015-2017).

Kate started her career at Oxfam, followed by 6 years at Shell International working across Africa and Europe. Kate is married to Duncan Low and has two children.