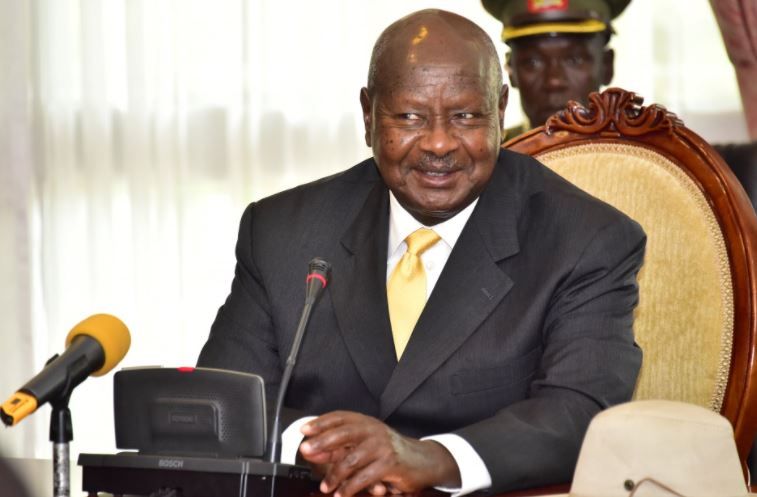 President Yoweri Museveni has revealed that the outbreak of Coronavairus (COVID-19) helped to save many of  his immunized Bazukulu from Naked Dances (Bimansulo), Transnight dancing (Ebikeesa), alcoholism, among other vices.

The President revealed all this and more in his most recent missive on social media, in which he noted that most of the youth don’t know how the National Resistance Movement (NRM) brought the peace they are enjoying, reason why many of them have since resorted to earthly indulgencies.

“Countrymen, Countrywomen and, especially, the Bazzukulu.

I am still reading the responses to my communication of yesterday on the NRM Primaries. I will reply in detail later. However, I want, for now, to repeat a few points. By going back to lining behind candidates, the NRM laid a good trap for the cheaters (the riggers).

The voting is done and concluded in each village and the scores are witnessed by hundreds of People. It is shallow criminality to think that you can enter false numbers on a piece of paper known as DR form and that that will give you the flag. You will end in prison for forgery and subversion instead of Parliament. An audit of village by village will expose you.

The villages have not shifted. They are still there. Even if you bribe the agents of the victim candidate to tell lies, the People who voted are there. They will bring out the facts. The lining up method was used until the 1995 Constitution. It had stopped rigging that time. Rigging came back with the secret ballot that covered most of the loopholes except the corruption of the election officials and the low vigilance of the population.

With the national elections, these two loopholes will be covered by the digitally read fingerprinting verification machines.

The Party cannot afford those machines. Hence, our answer is lining and at village- level. With the Confident Hon. Rukutana and others, the skepticism of some responders such as Kagaba, pmneyponsi, Joel, Arthur Lukyamuzi and others that they suspect that the NRM will cover them up, it is because these young People do not know the history of the NRM/ NRA and how it brought peace to Uganda for the first time in 500 years.

The Bazzukulu have grown up in total peace and freedom and until COVID-19 came in to suppress their free lives of ebikeesa (transnights), ebimansulo (naked shows), games, music concerts etc., they were living uninhibited lifestyles.

The freedom was brought about by the firmness and pro-People position of the NRM against wrong-doers. That is why the Bazzukulu, rightly, see the few actions of mistake making LDUs as terrible.

In the past, dead bodies floating on the River Nile or dumped in Namanve were non- events. See pictures attached

You want to know how the NRM/ NRA stopped all this?  See second picture

In the case of the Rukutanas, the Police did not give Police bond because, according to the Police, the evidence is clear and they should go for trial. I hope the DPP will also oppose bail. The image of impunity is not acceptable.