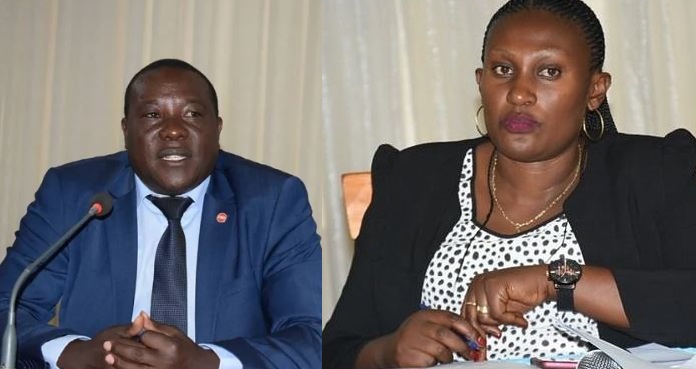 The  appointments were communicated in a Communique by the Office of the Prime Minister, issued July 7th,2020, which reads in part thus;

“Pursuant to the Law n14/2013 of 25/03/2013 determining the organisation and functioning of the Province especially in its article 9;

Shortly after the appointments,  Gatabazi tweeted thus; “Congratulations Dear Comrade @AliceKayitesi for Your appointment as The Governor of  @RwandaSouth. I pledge my support. God bless you abundantly.”

He added that; “I would like to appreciate each and every one of you who sent in messages, texted, called to congratulate me and send me best wishes. I call everyone to keep our President @PaulKagame in their respective prayers always for God to sustain his wise and objective leadership.”

On her part, newly appointed Governor  tweeted that; “I’m grateful to H.E. President @PaulKagame for giving me the opportunity to serve Rwandans in the position of Governor for Southern Province. I pledge to offer my best to this service.”

It should be recalled that in May this year, President Kagame suspended Governors of Southern and Northern Provinces over matters related to accountability.

Gatabazi was suspended together with Emmanuel Gasana, who has been the Governor of Southern Province since October 2018.

However, shortly after the suspension, Gatabazi quickly apologized to President Kagame for all the shortfalls observed during his tenure as governor.

He wrote on twitter that; “I apologize for any and all disappointment to You, Excellency @PaulKagame, @rpfinkotanyi and the people of Rwanda, and I look forward to the next chapter of my life continuing to serve my country to my best ability and always loyal to You Excellency President and RPF!” he wrote on his twitter handle.