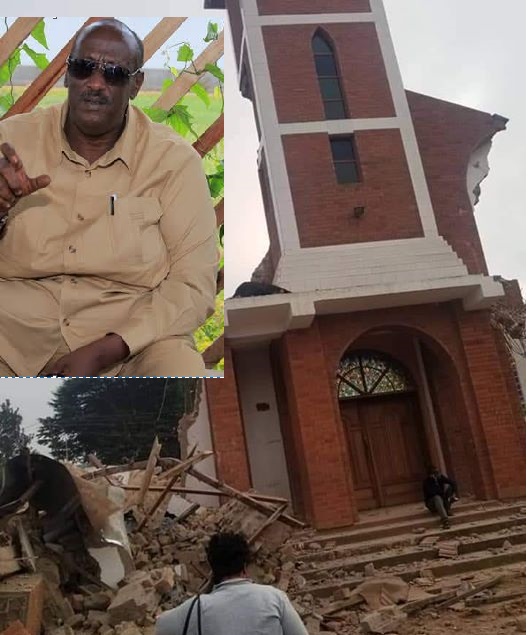 Veteran Uganda Peoples Defence Forces (UPDF) General Caleb Ankandwanaho aka Salim Saleh has refuted allegations that he was behind the demolition of St. Peter’s Church Ndeeba, which occurred early this week.

Gen. Saleh revealed this on Wednesday August 12, 2020, during a meeting with several bishops and religious leaders from the Church of Uganda.

“In the name of God. I want to swear to you that I am not involved in breaking churches,” Gen. Salim Saleh said.

He added that; “I don’t have any property in Kampala, the only one I have is the one in Mbuya, a house. I sold everything in Kampala….when I was chased from the army. The house in Mbuya is still there because my wife stopped me [from] selling it. I am in Kapeeka, [but] I am hearing Saleh, you are grabbing church land, am I mad [ to do that]?”

“In the name of God. I want to swear to you that I am not involved in breaking churches… That is crazy for one to think that Saleh can break a church. Those saying so don’t know me.”

Meanwhile,  the Church of Uganda Bishops held a meeting with Gen. Salim Saleh,  who is the head of Operation Wealth Creation (OW) together with his team and a number of Permanent Secretaries from different Ministries, to discuss partnership largely in modernized agriculture and improvement of household income across the Province.

The meeting which was chaired by Church of Uganda’s Archbishop The Most Rev Dr Stephen Kaziimba Mugalu, was held at Kawanda, at the headquarters of National Agriculture Research Organization (NARO).

The Archbishop, in his communication, requested Government to include Church of Uganda in the national budget to support extension services, marketing of the farmers’ produce, inspections in Church of Uganda founded schools and hospitals.

According to the Archbishop, an accountable sum of Shs50Bn per annum would do for a start.

He further sought for provision of a milling machine to each Diocese for purposes of value addition.

About mechanized agriculture, the Archbishop noted that Church of Uganda had requested for tractors to boost agriculture and appreciated government for the few that have been received so far.

“We had earlier requested for 37 tractors for purposes of each Diocese having a tractor, and Government allocated only 10, and 2 of these are already delivered. We request that the remaining 8 are delivered, and an additional 27 availed to cover all Dioceses.” Archbishop Kaziimba.

The archbishop also noted the need for post-harvest handling as a means of value addition and one of the ways to assure buyers of harvests quality.

“The recent lockdown is a reminder to us all about post-harvest handling of the farmers’ produce. We request that a silo (or any other warehousing system that can serve the purpose) is established in each of the 37 Dioceses. This does not have to be under Church of Uganda management provided the services are available to our farmers.”

He further reminded the government team of the presidential pledge of seeds to farmers.

He decried the current rate at which church land is being grabbed and sought urgent help from Government to support the Church in securing its land. He noted that the grabbers are organised and are sometimes supported by senior public servants as was the case in Ndeeba.

The Archbishop requested Government to guarantee the Church in undertaking a performance guarantee for income generating crops such as Soya. According to the Archbishop, this works in a way that the company providing the funds to buy inputs will undertake to purchase the produce.

On his part, Gen Salim Saleh applauded the church of Uganda for being organized in its structures and upholding sound financial integrity through giving accountabilities for all funds from partner organizations.

He pledged total support to church of Uganda to ensure that all people benefit directly from government programs to boost household income.

“I am very glad to partner with Church of Uganda because you have clear structures and accountability is very easy because every one in every corner of Uganda is able to get services from the nearest church. We want everybody to access government programs especially in agriculture which is the backbone of this country.” Gen Saleh said.

Gen Saleh said that the partnership with Church of Uganda will yield great results and will expedite implementation of the same with immediate effect.