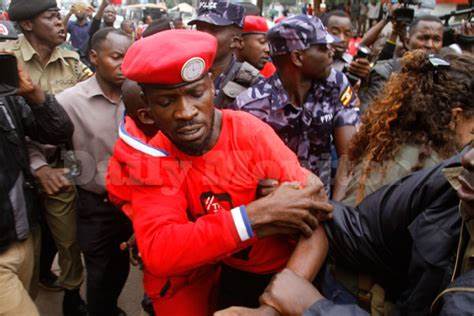 Elections in Uganda are scheduled for early 2021, and President Yoweri Museveni hopes for a sixth term in office. His challenger Bobi Wine accuses the government of obstructing his election campaign. Bobi Wine defiantly wears his trademark red beret in front of the cameras. Since 2019, only Ugandan soldiers can have this headgear. But that doesn’t appear to interest the pop star and current opposition presidential candidate. Bobi Wine gives the impression of a self-confident politician. He wants to defeat President Yoweri Museveni in the election planned for February 2021. The 38-year-old, whose real name is Robert Kyagulanyi, describes Museveni’s government as a dictatorship, and himself as extremely capable of succeeding the 75-year-old political leader. But Museveni, who has ruled for 34 years has thwarted the opposition: Political rallies are now forbidden in Uganda. The official reason: the spread of the coronavirus has to be limited. The candidates must now campaign for votes by leaflet, radio, TV, or on the internet. Yet, this is a difficult undertaking because incumbent Museveni exerts great influence on the mass media. Wine told our reporter that he got to feel this himself during a radio interview appointment he recently had: “When I tried to enter the radio station, the media building was surrounded by the army, and the soldiers began to beat my companions.” Allegations of police harassment When Bobi Wine appears on radio stations, many follow him on their Boda-Bodas [local motorcycle taxis]. The fans also often wait in front of the media houses to cheer him on. The police then intervene to stop them. Booking airtime with private media is also expensive, and state broadcasters do not broadcast debates with the opposition. It is also difficult for opposition politicians like Wine to gain traction on the internet. “Many of his supporters cannot buy data packages to follow his messages on the net. Museveni’s free-for-all airtime In contrast to Wine and others, Museveni’s ruling NRM party has a series of real advantages. There is even a rule that presidential speeches must be broadcast live by all radio and television stations. So, Museveni has a lot of airtime to himself. Analysts accuse the ruling party of using public funds to finance its political activities in the country. It was only a few days ago that they officially nominated Museveni as a candidate for the elections. Meanwhile, charismatic pop star Bobi Wine belongs to Africa’s younger generation of leaders and influencers, which tries to challenge long-term rulers like Museveni. Wine, who likes to spread his political messages in his music lyrics, is particularly popular with young people; Uganda has one of the youngest populations in the world: 77 percent of the country are under the age of 25. With his youthful approach and uncompromising attitude, Wine won a seat in parliament in 2017 as an independent candidate. Voter disenfranchisement The government has, however, made sure it could throw a spanner in the works for young voters especially: voter registration ended in December 2019 already, and people who have come of age since then will not be able to vote in the February 2021 elections. Bobi Wine is nevertheless working determinedly towards the election date next year. He already has plans laid out for his potential term as president: “My team and I want to reintroduce the rule of law in Uganda, including respect for human rights,” Wine said in the interview, adding that the health sector urgently needed to be improved. Wine has promised to overcome ethnic divisions in Uganda and unite the country. But he has made little progress so far: Talks to unite the divided opposition against Museveni have failed so far. The situation in the country largely remains calm. But that could change: “If the opposition is not given the opportunity to make its messages public, it will certainly become rebellious, and then the police and army will intervene. “according to estimates, this could affect around one million people.