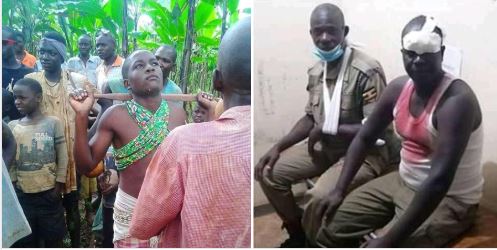 Manafwa, Mbale: A gang of irate locals in Manafwa District, Bugisu Sub-region on Sunday clobbered several policemen who tried to disperse a gathering that was launching the Bagisu cultural ceremony of circumcision, also known Imbalu.

According to our sources, the police officers, who  are currently nursing injuries at Mbale Main Hospital, were clobbered as they attempted to remind Bagisu to observe the Ministry of Health Guidelines on Social Distancing as a way of preventing the spread of COVID-19.

Our Moles in the area reveal that being a cultural norm of the Bagisu, the locals gathered on Saturday evening to kick-start Imbalu activities.

However, police officers were deployed to stop the cultural activities from proceeding, after the police said that the people were not conforming to the COVID-19 guidelines given by the Ministry of Health and President Yoweri Museveni.

However, the people protested the move and the officers started shooting bullets and teargas, injuring some locals.

A scuffle thereafter broke out after the group that had gathered resisted being dispersed. As the shooting continued the police officers ran out of bullets and that was when the Officer in Charge (OC) and his colleagues received thorough beatings from the angry mob.

Eyewitnesses say some officers had to lay down their weapons, raise up their hands up and surrender to growing masses that were determined to discipline them.

After clobbering the cops to pulp, the Bagisu went ahead with the circumcision activities.

However, by press time the Uganda Police Force Spokesperson Patrick Onyango had not yet issued a statement about this unfortunate incident and the clobbered officers were still undergoing medical attention.