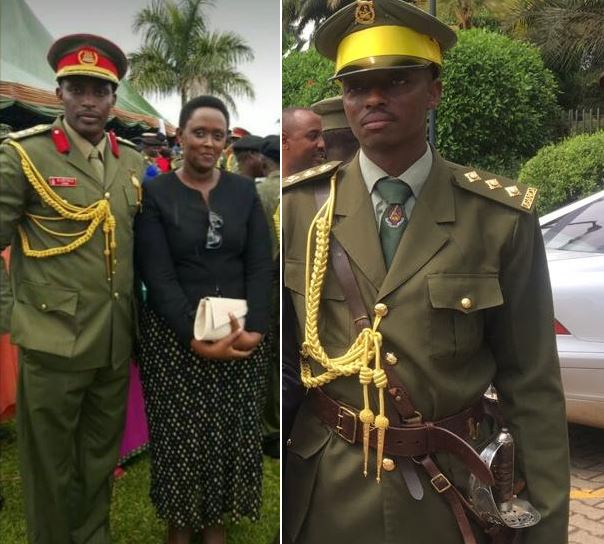 As you read this, a senior UPDF officer is coiling in bed every night like a priest after a Captain, who is several ranks lower than him, snatched his wife, a mother of five, whose Sumbie pals say he has since turned into cabbage.

According to our Moles, the officer whose wife is being feasted on has been identified as Col Keith Katungi, the commander of 309 Brigade whose headquarters are based in Hima town council, Kasese district, south western Uganda.

The ‘sex-predator’ UPDF Captain has also been identified as Capt. Moses Kashoma, who is attached to the Special Forces Command (SFC), an elite unit that guards the President and other key installations in the country.

Our Moles intimate that following the fall of his close ally Gen. Kale Kayihura, Kashoma used to spend most of his time at Nakasero under close monitoring and if he was not there, he would at Lounge69 in Ntinda having fun. Pals say that Kale had allegedly helped him to acquire a brand new Toyota Prado in UBB series for being a good comrade and it was while cruising his ride that he one day landed on a juicy babe, who has since sparked off a sex war.

The waterlogged babe who is the centre of their acrimony, our Moles reveal, is Noma Kakono, Katungi’w wife. Noma, according to sources used to work with the Protocol Unit of State House and her current job is not clear and it was where she started up her rendezvous with Kashoma.

Ever since their hook, Moles intimate that Capt. Kashoma allegedly started feasting on Noma’s soupy Bearded Meat without fear or favour to his senior colleague and he was doing it under the nose of his wife Hanifa Kiconco Karadi, a former Mbarara District Woman Member of Parliament (MP) Aspirant.

According to sources, Col. Katungi married Noma around 2006 after her bitter fallout with another senior army officer currently at  the rank  of Major General.

The couple went on to produce five children together (all girls), although wrangles later arose about the paternity of the fifth one, according to moles.

Sources told us last night that Col. Katungi allegedly started hearing rumours that Capt. Kashoma, who used to frequently host his wife (Noma) at his Kulambiro home had  been chewing her Sumbi and slashing all the Mohair around it during the dime the Colonel would be preoccupied with stat duties. At first he didn’t believe the rumours but as time went on, he started smelling a rat.

Sources say, Col Katungi later on confided in Capt. Kashoma’s wife (Kiconco) and informed her to warn her hubby to back off his wife if at all what he was hearing was true.

It is said that Capt. Kashoma’s wife informed Col. Katungi that she was also hearing the same rumours.

She revealed to him that even at one time her kids had informed her that their Aunt (Katungi’s wife Noma) who used to visit their home, was allegedly heard crying in the visitor’s room whenever she visited, but being young, they interpreted it that way. By then Kiconco had been away on a three months study course.

Sources say Capt. Kashoma, having realized that his kids had started understanding and on top of fearing his maid, decided to rent a bonking pad in Najeera, Kira municipality Wakiso district, for romping marathons with Noma.

Sources reveal as people sharing the same pain, Col. Katungi teamed up with Capt. Kashoma’s wife and embarked on a mission to nab their cheating lovers.

As fate would have it, the two were a few months ago nabbed in a rented pad in Najeera, where they were allegedly enjoying themselves in a manner that we cannot publish in this article!.

Sources say, Capt. Kashoma’s wife Kiconco, whom he has never wedded apart from a traditional ceremony, has since chased him out of their home in Kulambiro.

On the other side, Col Katungi, left with no option, decided to take part ways with his wife Noma and live with his children, in a bid to let sleeping dogs lie.

However, our sources who know Capt. Kashoma well intimate that he has an appetite for old loaded men’s wives.

Actually, he is said to have produced his eldest son, who is about 18 years old was produced from someone’s wife.

But our efforts to secure a comment from either Col. Katungi or Capt. Kashoma on this matter were futile as they couldn’t be reached  through their contacts.