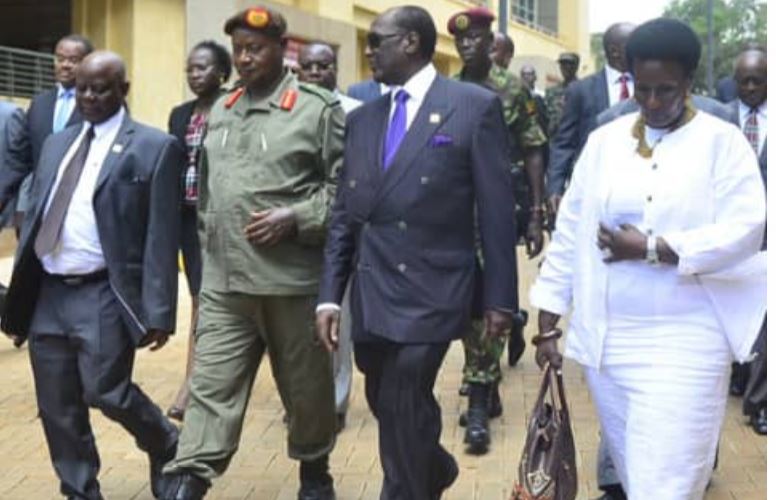 In a 138-page book written in very basic English, veteran business mogul Gordon Balaba Kasibante Wavamunno, has given his views on all the governments Uganda has had since independence.

And gratefully Wava, who was a youth representative at the 1962 Kololo celebrations, having travelled all the way from Rugaaga, Isingiro District, his birth place, has been an adult actively involved in business for all the years Uganda has been independent.

Having given Iddi Amin, Dr Milton Obote and other past Presidents their share of criticisms, Wava turns his wrath on Yoweri Kagita Museveni, a man whose ascendance to power through NRA rebellion he risked financing in the early 1980s.

Wava, who some say is angry because of the state’s refusal/failure to intervene to reverse his plummeting business fortunes, ironically has no kind words for Museveni and his NRM regime. In some sections of the book, the criticism of the once very revolutionary NRM is so vicious and venomous you could easily think you are reading a missive by Milton Obote or Kizza Besigye.

In his controversial book, Prof. Wava makes it clear the Museveni we have today is totally different from the one he knew and closely related with years ago

He gives his views on many of the Museveni era policies on things like education, economy, foreign investors, job creation, governance and corruption fight. He also makes very stinging criticism of the way the oil and petroleum resource has been managed thus far and his conclusion is that Ugandans aren’t going to benefit.

In fact, Wava who scolds the President for intriguingly referring to the resource as “my oil”, presents what he calls indicators that oil has already “been mortgaged” to Chinese and other foreigners under the guise of funding numerous mega infrastructure projects costing (in his own words) over $15bn.

Wava, whose anger at Museveni has continued shocking many who have read the book so far, goes as far as implying oil discovery isn’t a big deal and it’s not something that makes Museveni special in any way.

The proud and seemingly unrepentant Muganda businessman goes as far as praising/crediting British Chief Geologist EJ Wayland, whom he says is the one who discovered and confirmed existence of commercially extractable oil in Albertine Graben as early as 1920s. He gives several reasons he suspects could explain why the British, who were desperate to revive lost glory and ravaged economy after the ruinous World War II, didn’t immediately commence production and extraction of this oil.

In his controversial book, Prof. Wava makes it clear the Museveni we have today is totally different from the one he knew and closely related with years ago.

He claims the powerfully connected NRM actors (he calls them oligarchs) have already accepted gratifications (like trips to casinos in Las Vegas, fancy cars, mansions on the Riviera etc) in order to betray the poor Ugandans especially in oil-rich Bunyoro/Buliisa regions.

He vehemently likens them to forefathers who accepted “brightly colored beads and bottles of hard liquor” centuries ago to acquiesce in the slave trade by slave traders whose greed for material accumulation he equates to that of oil companies targeting contemporary Uganda.

Besides condemning the NRM government for acquiescing to modern day slavery which he says large commercial farmers (like Madhvani and Metha) are condemning Ugandans by overworking and underpaying them, Wava also tackles the decentralization (LC systems) policy and says it has bred corruption and stunted Uganda’s economic development.

Calling for a comprehensive review of the same (similar to what government think tank NPA is suggesting), Wava proposes scrapping of the LC system and replacing it with the Kiganda Model of the Abatongole (equaling LC1s), Ab’emiruka (LC2s), Aba Magombolola (LC3s) and Abamasaza (at County levels). He says that system worked wonders in the pre-1986 period and it was a mistake for Museveni to desecrate it in favor of the RC (later LC) system which he contemptuously says was only suitable for the bush war as a mechanism to build consensus while eliminating disgruntlement, exclusion, betrayal and espionage.

Prof. Wava says Museveni should reflect and emulate his mentor Julius Nyerere and retire for any of the successors he is ideally supposed to have groomed in the last 30 years.

Wava, whose father was a very efficient Muluka Chief in Isingiro where he was deployed from Buganda by the British, nostalgically recalls how those chiefs were respected and delivered results.

He recalls they earned a salary and were appointed, unlike today’s LC1 executives who can’t afford to annoy anyone fearing to lose the next election. He says in absence of remuneration, today’s LCs resort to corruption and bribe-solicitation to offer even would-be free services.

Saying the LC system is a total failure, Wava calls on Museveni to own up to this failure, apologize and even reenact graduated tax which in the past adequately funded the pre-1986 local government structures to operate and deliver services to the people.

He also condemned creation of new districts saying it only results into hemorrhaging of scarce resources as opposed to bringing services nearer to the people as Museveni used to political explain justifying this balkanization which Wava says has been dramatized (people eating rats and parading skulls in Nakaseke) besides fermenting conflicts between ethnic groups that for centuries amicably co-existed.

He says time has come for Ugandans to overlook what Museveni thinks and have a sober discussion between democracy (NRM’s LC systems which are elective) and efficiency (the appointed chiefs who didn’t fear annoying anyone).

Calling the LC system very “rudimentary” and unhelpful, Wava commends Buganda kingdom for continuing to have in place the system of chiefs similar to what he is recommending notwithstanding the financial constraints under which the Kingdom (whose administrative structure he says gov’t ought to fund for the good of service delivery) operates.

In his hey days, President Museveni cherished and publicly praised local busisness moguls including Prof Wava who now faults him for over favoring foreign investors

Claiming that serving in the old Kiganda system was associated with pride, Wava says today’s LC system is shunned by decent people allowing “the riff raff to elect themselves to office.”

He also says creation of many districts has been used by the NRM to drive an ethnic wedge between communities that harmoniously lived together for an eternity. He says undesirable as they were, the British colonialists refrained from such things.

Wava also reflects on elections in Museveni’s Uganda concluding they are mere rituals to enable the incumbent satisfy donors and multinational lenders like WB and IMF that he leads a country that is compliant to international best governance practices. He says elections in Museveni’s Uganda have become “mere coronations” because “the longer one stays in power the more votes” they get at the subsequent general election.

Prof. Wava says Uganda needs foreign investors from China, India, EU and America but sectors like agriculture should be ring-fenced for the locals.

He argues that some of the mistakes Museveni has made would have been avoided if it wasn’t the problem of sycophants shielding him against knowing the reality of the real painful life the ordinary people endure every day of the week.

He says this is common with leaders who overstay in power and the only way Museveni can learn what’s happening first hand and champion the necessary reforms is by working out a mechanism to be able to go interact with the people directly so that he gets spontaneous feedback from them.

Wava then proceeds to discuss political succession in Uganda which he says has been mismanaged since independence, culminating into turmoil and political instability. Condemning the removal of term limits in 2005, Wava says having ruled Uganda for all this long, Museveni ought to have left the chair (refers to his best pal Binaisa who called it sweet) many years ago.

He counsels: “To avoid being splashed with all the mud, rulers should stay for a reasonably short time and above all choose people around them very carefully.”

He also considers it such a major failing for Museveni not to have named a successor up to now and this is how he shares his frustrations: “There is no shortage of people capable of governing Uganda properly. And at all times leaders will emerge…In the last 30 years, no grooming school has been set up either.

Thirty years of relative stability is enough to establish a grooming school so that the next generation of leaders can go through their paces and become seasoned leaders. The measure of a good leader should be his ability to train replacements for we all grow old, weak and become less able to carry out our duties efficiently as time catches up with us. Our rulers [intriguingly this is the word he uses throughout; not leaders] should therefore not shun the responsibility of identifying those to succeed them,” he writes.

He argues the only way to ensure the elections are used to deliver proper leaders for the country is to politically grow the electorate to a level where all electors have minimum qualifications equaling those of the candidates campaigning among them to be elected.

That leaders like Museveni “owe it to their country to make sure that their departure is not followed by the shedding of blood and martyrdom [because] that is the real measure of their success in the high office.”

Wava, who closely has interacted with all Uganda’s post-independence governments by virtue of the conspicuous business roles he has played, says gun rule is one of the many common features he has noticed whereby leaders stay in power by virtue of the gun more often than for the votes they get. He says this unleashing of violence on political foes has been a constant.

Reminding his readers Julius Nyerere is on his way to sainthood, in a process that is being fast-tracked by the Ugandan President, Wava urges Museveni to reflect on his failings and learn from the ex-Tanzanian President (a man he publicly idolizes) and opt out of the Presidency without waiting to be herded out of the chair.

This is what the holder of the honorary professorship writes on Nyerere at page 96 of his book: “[He] apologized to Tanzanians in 1985 when he realized that Ujamaa had failed. He then left the stage and enjoyed his elevation to elder statesman until his death. He remains one of the most highly regarded and respected leaders Africa has had.”

He concludes his argument on that succession point by urging Museveni to emulate his mentor Nyerere and bow out at earliest, arguing it’s the only way all he worked for can be sustained for him to have an enduring legacy.