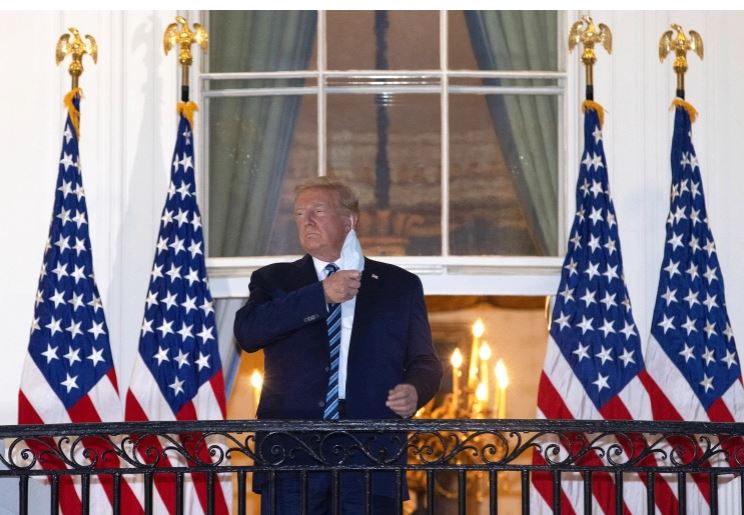 There is uproar in America after US President Donald Trump told Americans “to get out there” and not fear COVID-19 after he returned to the White House on Monday, following three nights in a military hospital where he received experimental treatments to tackle a disease that has killed more than 210,000 Americans.

Trump, who still has the virus and remains contagious, took off his mask to pose for pictures and salute from the balcony of the White House. He later tweeted a video capturing his return to Washington, DC, and a message to his supporters.

Trump said he felt “real good” about his return to the White House, where a cluster of cases have emerged since he, his wife Melania and close adviser Hope Hicks were diagnosed last week. Press Secretary Kayleigh McEnany, along with two assistants and three White House journalists are the latest to test positive.

Trump wore a mask as he got out of the helicopter that flew him back from the Walter Reed military hospital outside Washington, DC, but removed it after he climbed the stairs of the White House South Portico, where he posed for pictures, waving, saluting and giving thumbs-up signs.

He then turned to walk into the White House, filmed by a cameraman, his mask still in his pocket.

“It was President Trump’s reality TV in a way; carefully produced, striking what he hopes are all the right notes,” said Al Jazeera’s Mike Hanna, reporting from Washington, DC. Trump, a New York property developer, was best known as the star of the reality television show, The Apprentice, before he became president in 2016.

The Republican president, who is running for re-election against Democrat Joe Biden in the November 3 election, was admitted to hospital on Friday after being diagnosed with the disease caused by the novel coronavirus.

“Don’t let it dominate you. Don’t be afraid of it,” Trump said in the video message which he shared on Twitter. “We’re going to beat it. Don’t let it take over your lives. Maybe I’m immune, I don’t know.”

It should be noted that COVID-19 has so far killed more than one million people around the world with the death toll in the United States higher than anywhere else.

However, although many of Trump’s supporters were delighted to see him, critics are faulting him for having erroneously left the isolation centre without being declared as recovered from the virus by medical officials, which might endanger the lives of other peoples, especially White House staff.