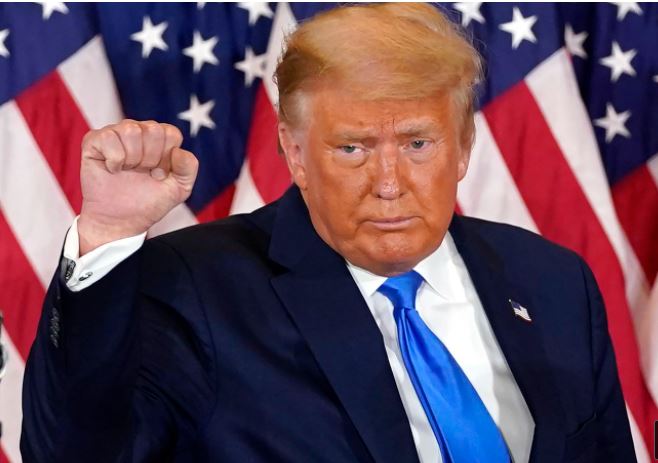 Trump claimed the election was being ‘stolen from him’ in an extraordinary address to the country on Thursday, after realising that his rival Joe Biden was claiming the lion’s share of the votes.

He launched 17-minute tirade spelling out his conspiracy theory that ‘big tech, big money and big media’ were rigging the race to get a Democrat in the White House.

However, TV networks NBC, CBS and ABC switched him off as he ranted, reading from a script which he had written on in sharpie

He presented no evidence of fraud and hinted darkly at the blizzard of litigation his campaign has launched despite courts in Georgia and Michigan turning him down.

Fox News and CNN were among the few channels to air the president’s full speech, after which CNN’s Anderson Cooper said Trump was ‘like an obese turtle flailing in the sun.’

‘That is the President of the United States. That is the most powerful person in the world and we see him like an obese turtle on his back flailing in the hot sun realizing his time is over,’ Cooper said on air.

‘But he just hasn’t accepted it and he wants to take everybody down with him, including this country.’

Fellow news anchor Lester Holt also cut away from Trump’s speech due to the ‘false statements’ he was making.

Cooper’s harsh sentiments were echoed by fellow network personalities who cut away from Trump’s address to sharply criticize him over his angry, middle-of-the-night speech as the election hung in the balance.

‘We have to interrupt here, because the president has made a number of false statements, including the notion that there has been fraudulent voting,’ said NBC’s Lester Holt. ‘There has been no evidence of that.’

CNN’s Jake Tapper called it a ‘sad night’ for Americans who had to hear the president ‘try to attack democracy that way with this feast of falsehoods.’

‘Lie after lie, after lie about the election being stolen. No evidence for what he’s saying, just smears about the integrity,’ he told viewers.

‘When he wins a state it’s legitimate, when he loses it’s because the vote is being stolen from him. It’s not true, it’s frankly pathetic.’

Tapper also blasted Trump for questioning why the majority of mail-in ballots were in favour of Democratic challenger Joe Biden when he had urged his base to not take part in the process.

‘We all know the answer. It’s because the president told his supporters not to vote by mail so Democrats did it overwhelmingly,’ he said.

MSNBC also cut away from Trump to anchor Brian Williams during the speech.

After ABC ended its coverage, the network’s White House correspondent, Jonathan Karl, also said there was no evidence of illegal votes.

USA Today’s editor-in-chief Nicole Carroll issued a statement explaining her decision to pull the livestream of the event.