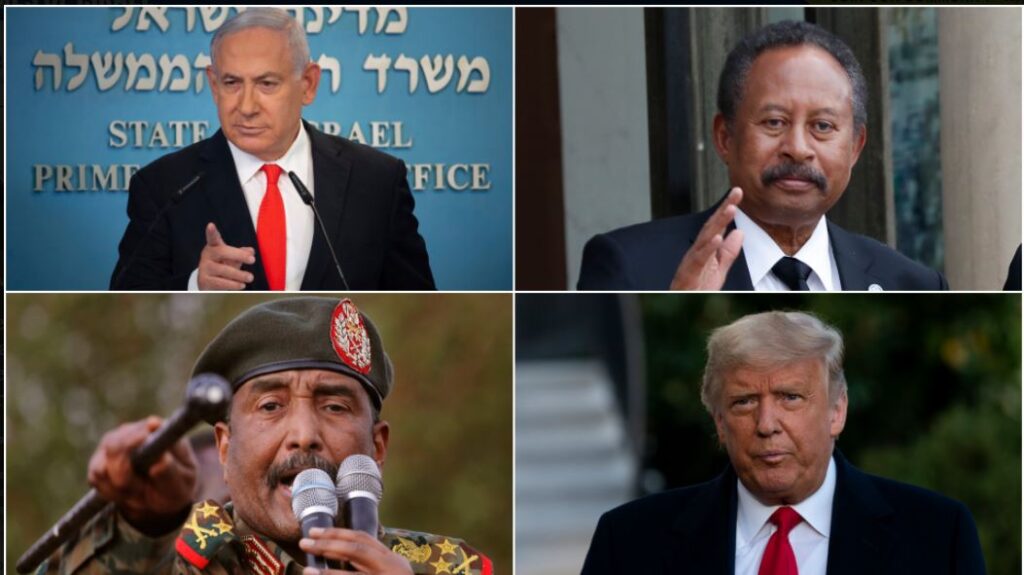 President Donald Trump’s Administration has finally succeeded in the bid to normalise relations between the United States of America, the Republic of Sudan and the State of Israel.

T his was revealed Friday October 23, 2020, in a joint statement issued by the White House and the leaders of Sudan and Israel over the matter.

The statement reads in part thus; “The leaders of Sudan and Israel have agreed to normalize relations, end the state of belligerence between their nations, and begin negotiating agreements of cooperation on the economy, trade, and more.

This historic agreement is a testament to the bold and visionary approach of the four leaders!

As such, President Trump, the Sudanese Chairman of the Sovereignty Council Abdel Fattah al-Burhan, Sudanese Prime Minister Abdalla Hamdok, and Israeli Prime Minister Benjamin Netanyahu spoke on Friday to discuss Sudan’s historic progress towards democracy and opportunities to advance peace in the region.

The Sudanese transitional government has demonstrated its courage and commitment to combating terrorism, building its democratic institutions, and improving its relations with its neighbors.

In light of this historic progress, and following President Trump’s decision to remove Sudan from the State Sponsors of Terrorism list, the United States and Israel agreed to partner with Sudan in its new start and ensure that it is fully integrated into the international community.

The United States will take steps to restore Sudan’s sovereign immunity and to engage its international partners to reduce Sudan’s debt burdens, including advancing discussions on debt forgiveness consistent with the Highly Indebted Poor Countries Initiative.

The United States and Israel also committed to working with their partners to support the people of Sudan in strengthening their democracy, improving food security, countering terrorism and extremism, and tapping into their economic potential.

The leaders also agreed that delegations will meet in the coming weeks to negotiate agreements of cooperation in those areas as well as in agriculture technology, aviation, migration issues and other areas for the benefit of the two peoples.  The leaders also resolved to work together to build a better future and advance the cause of peace in the region.  This move will improve regional security and unlock new opportunities for the people of Sudan, Israel, the Middle East, and Africa.

This historic agreement is a testament to the bold and visionary approach of the four leaders.

Prime Minister Netanyahu, Chairman al-Burhan, and Prime Minister Hamdok expressed their appreciation for President Trump for his pragmatic and unique approach to ending old conflicts and building a future of peace and opportunity for all the people of the region.”