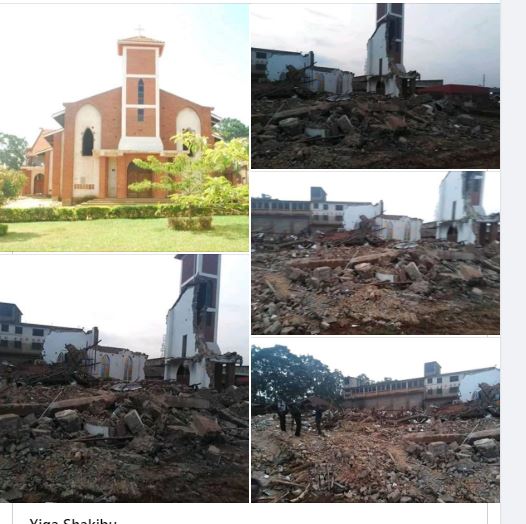 Christians in Kampala on Monday woke up to shock  following the demolition of St Peter’s Church in Ndeeba, which was demolished on Sunday night by  yet to be identified people, on orders of a city tycoon.

Following the demolition, we have established that several policemen and other security personnel who oversaw the exercise have since been arrested and charged with  neglect of duty.

We have learnt that the Police on Monday the police  arrested three of their own and 11 other men over the demolition of St. Peter’s Church Ndeeba in Rubaga division, Kampala, contrary to the government directive stopping evictions during the COVID-19 lockdown.

“They are being charged with neglect of duty. We want to warn the general public who are planning to evict people during this period of COVID-19 that they risk being arrested and charged in courts of law if they go ahead with their intentions,” Patrick Onyango, the Kampala Metropolitan Police spokesperson said in a statement.

Onyango revealed that they are investigating circumstances under which St. Peter’s Church of Uganda, Ndeeba, was demolished this morning, disregarding government directives that stopped all evictions during this COVID-19 period.

Onyango said 11 other people who were found at the scene while demolishing the church were also apprehended.

Onyango added that; “Katwe Police Station got information of the demolition at 01:00 hours and a team was dispatched to the scene. Police were not informed about the eviction and demolition as the practice is.  The team found people demolishing the said church and arrested 11 suspects.”

“They are currently detained at Katwe Police Station to help with investigations. The suspects are charged with malicious damage to properties,” Onyango said.