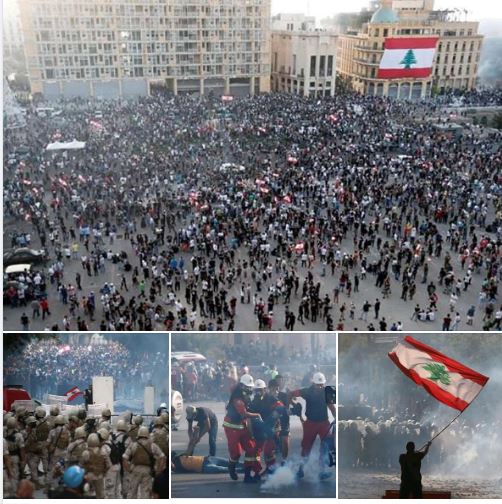 Thousands of protesters gathered in central Beirut on Saturday to vent their anger at a political elite they blame for a deadly explosion that turned the city into a disaster zone last week.

The large crowd of demonstrators, some of them holding nooses, called for revenge as a large deployment of security forces tried to contain some groups seeking to advance towards Parliament.

Police used teargas against groups of demonstrators hurling rocks and sticks on the fringes of the main gathering, which was relatively peaceful despite high tensions since the blast on Tuesday.

Among the main hashtags used on social media to rally protesters was (prepare the gallows), and demonstrators had set up mock gallows on the main square on Friday.

The health ministry said at least 158 people died in Tuesday’s explosion, an estimated 6,000 were wounded, and at least 21 were missing.

Lebanese police fired tear gas to try to disperse rock-throwing protesters blocking a road near Parliament in Beirut on Sunday in a second day of anti-government demonstrations triggered by last week’s devastating explosion.

International leaders joined a virtual donor conference led by France and the UN in the aftermath of the devastating explosion, pledging nearly $300m in humanitarian assistance that will be “directly delivered to the Lebanese population”.

US President Donald Trump has announced that the US will give “substantial” aid to Lebanon, but did not specify how much.

0The International Monetary Fund (IMF) said it is willing to redouble efforts to help Lebanon after the devastating explosion, but said all of the country’s institutions needed to show willingness to carry out reforms.