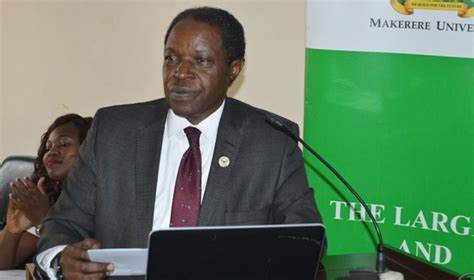 Prof William Bazeyo the deputy vice chancellor Finance and Administration of Makerere University has resigned from his duties at the University.

The reasons for Bazeyo’s tendering in of his resignation are yet to be known.

Since September 2017, he has been the deputy vice chancellor in charge of finance and administration at Makerere University.

In August 2020, Bazeeyo won a shs 185b grant for the University, a move that have hope to the Ivory Tower top management and the country at large.

“This UGX 185 billion grant win by Prof. William Bazeyo is unprecedented. It’s the largest single grant win by an academician in the history of Uganda. What is important about this grant is that it is to benefit the entire country. Well done Prof. Bazeyo, you have set the bar high!” Professor Barnabas Nawangwe said.

The grant from the Centers for Disease Control and Prevention (CDC) under the US President’s Emergency Plan for AIDS Relief (PEPFAR) will support the Ministry of Health under a five-year project.

Prof. Bazeyo is the Principal Investigator (PI) of the project “Strengthening the Government of Uganda’s Capacity for Regionally Centered and District Implemented HIV and TB Programming through Health Information Systems, Case Based Surveillance, Monitoring, Evaluation and Quality Improvement Support under PEPFAR”

William Bazeyo, is a Ugandan physician, public health specialist, academic, researcher, and academic administrator. Since September 2017, he has been the deputy vice chancellor in charge of finance and administration at Makerere University. During the preceding eight years, he was the dean of the Makerere University School of Public Health.

Bazeyo has been active in general practice and public health for two decades. He was a principal actor in the formation in 2005 of the Higher Education Alliance for Leadership Training for Health, which brings together seven schools of public health in six countries. He also serves as the director of the Centre for Tobacco Control in Africa, which supports government efforts to build and sustain the capacity to regulate tobacco in Africa.

In addition to his university assignments, Bazeyo serves as the chief-of-party at the Resilient Africa Network, which is composed of 20 universities in 16 African countries and whose mission is to strengthen the resilience of communities through education and innovative technologies and approaches.