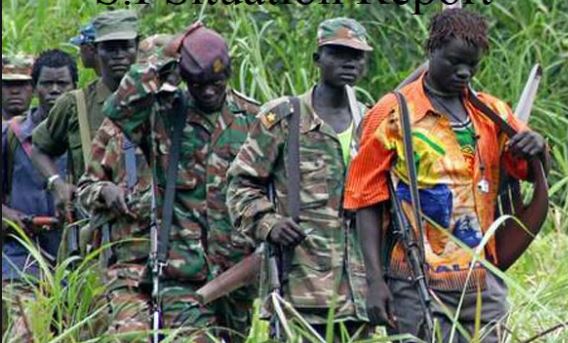 More than 40 innocent civilians were slaughtered  in the latest DR Congo massacre after Allied Democratic Forces (ADF) rebels attacked the village of Samboko in Ituri province, on Tuesday night, killing dozens using machetes, according to human rights groups in the war-torn country.

The Democratic Republic of the Congo’s army launched an offensive to oust the armed group from its bases in the northeast last year after their constant attacks on civilians in the mountainous jungles near the Ugandan border.

Fighters from the Allied Democratic Forces (ADF) group, which was driven out of Uganda in the late 1990s, attacked Samboko village, about 100km (60 miles) southwest of the city of Bunia, Omar Kavota from rights group CEPADHO said on Wednesday.

“A day after killing at least 17 in the nearby village of Makutano, ADF members killed at least 40 people with machetes and looted food and valuables early on Tuesday”, Kavota added

More than 400 people have been killed in attacks attributed to the ADF since the army began an offensive to oust the group from its bases last year, according to the Kivu Security Tracker (KST), a research initiative that maps unrest in the region.

Following two months of relative quiet, the area has seen a rise in deadly attacks in the last three weeks, KST said.

Rachel Tarwayo, a government administrator, said she was aware of the Samboko incursion but could not provide any further details.

“On the ground, some people have fled and others have given themselves the courage to stay for the moment,” said Gili Gotabo, a rights activist in the region.

The ADF has pledged allegiance to the armed group ISIL (ISIS), but researchers say there is no evidence of close collaboration. ISIL has also endorsed some ADF attacks.

About 200,000 people have fled their homes in Ituri province, where the two villages are located, in the past two months because of the widespread violence by a variety of armed groups. The attacks have also hampered efforts to stamp out an Ebola epidemic.

More than 700 people have been killed in Ituri since late 2017, a United Nations report said in January, adding that some of the deaths might constitute a “crime against humanity”.

Last month, 22 people from the Hema community were killed in attacks in the village of Koli in Ituri province, which were blamed on the Cooperative for the Development of Congo – an armed political-religious sect drawn from the Lendu ethnic group.

Conflict between the Lendu, mainly farmers, and the Hema, herders and traders, has a long history in the gold- and oil-rich region.

Researchers and rights groups say some Congolese soldiers have also participated in massacres since 2014 for a variety of motives, often related to competition for power in resource-rich lawless zones dominated by dozens of armed groups.