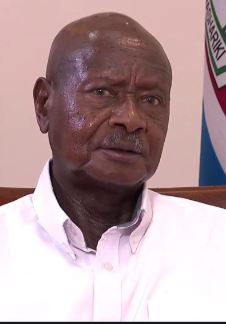 President Yoweri Museveni has through the National COVID-19 Task Force, which is headed by Prime Minister Ruhakana Rugunda, issued new directives to all cargo truck drivers, which will help in the fight against the spread of Coronavirus.

Museveni’s Directives were issued  shortly after health officials had observed that fresh data show most of the  new infections are truck drivers operating in Kenya, Tanzania,  Rwanda, Uganda and South Sudan.

The new Presidential directives are thus aimed at preventing infected drivers from entering the country and limiting the number of people they come into contact with along their journeys.

The Directives, which were communicated by the Prime Minister Dr Rugunda are as follows;

OFFICE OF THE PRIME MINISTERNATIONAL SECRETARIAT FOR THE NATIONAL TASK FORCE
Resolutions from the Trade and Transport National Task force sub-committee meeting of 24th April, 2020
The meeting has agreed as follows;

1. Have one driver per truck for all transit trucks. This will operate for the next 4 weeks after which the relay system for drivers will be adopted. However, the ready transporters are encouraged to having relay drivers within different countries.

3. All cargo in bound and out bound transit cargo trucks should follow the same journey management plan indicated above.

4. No diversions of cargo trucks off the designated routes.

5. All other previous stop points for cargo trucks (such as tororo, Mbale, Lira, Kamdin corner town, Mbiko, Naluwerere, Lyantonde, Namawojoro, Sanga, Ruti, Migeera, Luweero among others) are all declared illegal with immediate effect.

6. All Agencies including MoH should operate 24 hours at Malaba, Mutukula and Busia

7. Reinforce border patrols and surveillance at all illegal entry points.

8. Freight forwarders commit to pay for testing kits. Modalities for the payment will be worked out between the private sector and the MoH.

9. Consider using Rail and water transport for fuel and other dry cargo. However, URC should be supported for logistical needs including locomotives.

12. A Truck driver is required to have and use Personal Protective equipment (PPE) and sanitizers.

This however comes shortly after the Ministry of Health announced that the number of COVID-19 cases in Uganda is currently 75, with many of the new cases being truck drivers.