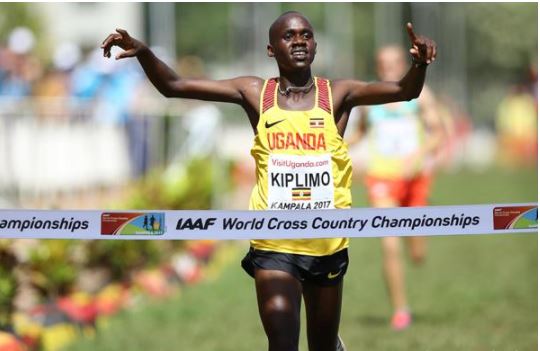 Shortly after Kiplimo was announced winner of the world record breaking title, President Museveni tweeted thus; “Congratulations to you Jacob Kiplimo on winning Gold for Uganda at the World Half Marathon championship. I also congratulate @joshuacheptege1 and the rest of the team; the Ugandan Flag has been raised so high.”

Kiplimo has won the World Half Marathon title in a championship record 58:49.

The 19-year-old becomes the first Ugandan athlete to achieve the feat.

Kiplimo’s victory added the gloss to an already stellar year for Uganda’s athletics, thanks in a huge part to Joshua Cheptegei, the world record holder of the 5,000 meters race.

Cheptegei also took part in the Half Marthon and finished fourth.

Kenya’s Kibiwott Kandie clocked a time of 58:54 to walk away with the silver medal while Ethiopia’s Amedework Walelegnwhile crossed the finish line in a time of 59:08 to win bronze.

Kiplimo,  born 14 November 2000, is a Ugandan long-distance runner who competes in track running events. He is the 2020 Half Marathon Word Champion. He represented his country at the 2016 Summer Olympics.

A member of the Sebei ethnic group, he grew up in Bukwo on Mount Elgon, living at high altitude.

At the age of fifteen he won the 10,000 metres bronze medal at the 2016 IAAF World U20 Championships behind fellow East Africans Rodgers Kwemoi and Aron Kifle. Of as much importance as that placing was his time of 13:24:40 minutes for the 5000 metres in Rome that May. That was enough to reach the Olympic standard and gain selection for Uganda at the 2016 Summer Olympics. As a result, he became the youngest ever Olympian for Uganda.

Prior to the 2016 Rio Olympics, he improved his 5000 m best further to 13:19.54 minutes. The youngest entrant to the competition he ran in the Olympic heats only, recording a time of 13:30.40 minutes for eleventh in his race. He is the youngest ever competitor for Uganda at the Olympic Games, with the age of 15.

At age 16, Jacob Kiplimo produced a performance of a lifetime to win gold in the men’s U20 race at the 2017 IAAF World Cross Country Championships in Kampala, the country’s first ever gold medal at a World Cross, covering the 8 km course in 22:40 minutes.

At the Ugandan Cross Country Championships on 16 Feb 2019 in Tororo, Kiplomo defeated Joshua Cheptegei by both placing first and second respectively. In the men’s senior race over 10 km, Kiplomo won by an 11-second lead over the 10000 m world championship runner up.

At the 2019 IAAF World Cross Country Championships in Aarhus, Denmark, Kiplimo finished second in the senior men’s race 4 seconds after Joshua Cheptegei’s winning time of 31:40. He won the gold medal in the teams ranking with Cheptegei from Uganda.

Kiplimo did not run in the 10,000 metres at the 2019 World Athletics Championships in Doha, because of an injury.

On 31 December 2019, Kiplimo ran the Saint Silvester Road Race and was beaten by Kibiwott Kandie on the finish line. Kandie won in 42:59 a new course record with Kiplimo finishing in 43:00.