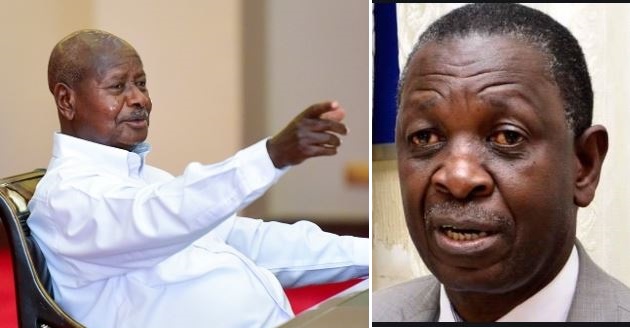 Colonel Kaka,  who was replaced by Lt. Col. Charles Otuka at ISO, is a Ugandan retired military officer in the Uganda People’s Defence Forces (UPDF).

Effective January 2017, he was appointed the Director General of the Internal Security Organisation, Uganda government’s counter intelligence agency, responsible for providing national security intelligence to Uganda’s policy makers, a position he served in until early this month when he was relieved of his duties.

He was born in Ibanda District, in Uganda’s Western Region, in February 1952. He attended local schools before he was admitted to Makerere University circa 1974. In 1977, he graduated from Makerere with a Bachelor of Commerce degree.

In 1981, Bagyenda joined the National Resistance Army (NRA), a rebel guerrilla outfit, led by Yoweri Museveni, who waged the Ugandan Bush War, between 1981 and 1986.

He carried out covert operations for the NRA and was instrumental in the capture of Masindi Army Barracks by the NRA on 20 February 1984.

To disguise himself from the Uganda National Liberation Army (UNLA) soldiers, he adopted the name Kaka, dropping his birth names Frank Bagyenda. He served in the Ugandan military, rising to the rank of Major, before he retired at that rank in 1993.

His assignments in the military included as the commanding officer of a brigade based in Kampala, Uganda’s capital city.

In 1994, he was recalled and conscripted to assist the Rwanda Patriotic Front capture power in Kigali.

He remained in Uganda however, engaging in the trucking business in Western Uganda, and setting up Panoma Hotel in Kalangala, in the Ssese Islands.

While in Kalangala, Bagyenda remained an active intelligence operative, playing a role in the disruption of illegal fishing on Lake Victoria. In 2013, he was promoted to the rank of Colonel, while in retirement.

In January 2017, he was appointed to head ISO, replacing Brigadier Ronnie Balya, who was appointed Uganda’s ambassador to South Sudan, based in Juba.