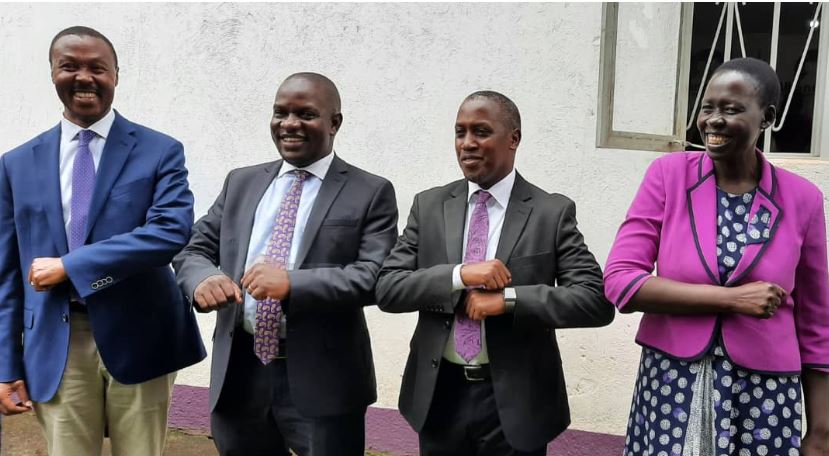 As the 2021 elections loom nearer, several politicians are defecting from their parties while others are joining political blocs so as to garner support from voters ahead of the elections.

In his welcome message to Hon. Mwiru Hon. Karuhanga to the ANT, George Muhimbise, a member of ANT, wrote thus;

“I interacted with Hon. Mwiru Paul in 2010 when he accompanied Gen Muntu when he was contesting for FDC flag with Dr Besigye. Hon. Mwiru was cool, intelligent and humble. He was a man of character and discipline. His message was about values, systems and building Institutions.

Hon. Mwiru has had to contest for MP four times in two terms, every time his votes are stolen and he has to win through courts of law and subsequent by-elections. All this comes with expenses, temptations, threats etc but Hon. Mwiru is steadfast, strong, determined and focused. I have somehow worked with him since then, there is no doubt that he is one of the finest legislators in this country.  In Mwiru we carry our heads high because, we have gold with us, we have competence with us, we have consistence,  hard-work and determination with us.

I came to interact with Hon. Gerald Karuhanga during 2011 when he found us in Kamwenge campaigning for the youth MP. He was so passionate, so eloquent and so organized.

Even when he was opposition, he  defeated heavily funded Aggrey Kyobuguzi who had worked at NAADS Secretariat heading youth docked. An opposition winning an election in Western Uganda where 95% of the Electoral College was NRM dominated tells you the exceptional organisational skills of Hon. Karuhanga.

He became a darling when he tabled documents in which the usual thieves had plundered oil money and in this he made Parliament to have a say on oil matters in the country. Before then Parliament was not even a spectator but an unknown entity when it came to oil matters. He put his life on risk for the sake of our oil.

He was one of the MPs that took government to court after amending the constitution and luckily Ugandans were able to recover the two years that MPs had awarded themselves.

Karuhanga recently saved tax payers 10 billion shillings when through court he caused for the vomiting of Shs20M that MPs had awarded themselves. I can’t say much because his credibility is written on the wall of fame.

I welcome the two men of Integrity Hon. Paul Mwiru and Hon. Karuhanga. They join the most respected, most humble, most honest, most tolerant politician Gen. Mugisha Muntu as  Presidential Candidate, the soft spoken, intelligent, honest,  humble and God fearing lady Hon. Alaso Alice as an acting interim coordinator and a set of  many other  leaders of the same character whose names I may not mention because of lack of space in shaping a new future for this country.

I congratulate you and call on other members of the public, leaders and all people of good will to join the Alliance.

May God bless you all.”