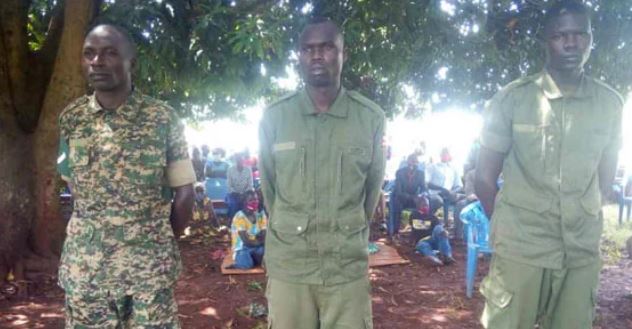 Court heard that Ogwang who was a resident of Amati Village, Kamdini Sub-county, died on June 27, 2020 after being beaten by a UPDF soldier and two LDU operatives.

Eyewitnesses told court that on the fateful day, UPDF and LDU operatives were in the area to enforce the Coronavirus lockdown measures announced by President Museveni recently.

On Monday, Pt Opoka, 22, told the army court martial sitting at Amati Primary School in Kamdini Sub-county that he was responsible for the murder.

“I found him (Ogwang) lying under a table. I tried to wake him up by kicking and using my gun. He stood up and cried: ‘my son, do not kill me, I’m still alive,”’ Pt Opoka confessed, before court, and admitted that he kicked the deceased to check whether he was still alive or dead.

During the hearing, Lt Abubakar Nyombi, the defence counsel, pleaded for leniency from court, arguing that the convicts were first offenders and breadwinners for their families.

However, the prosecution team led by Lt Alex Rasto Mukhwana asked court to hand the accused persons a heavy punishment that would deter others from perpetrating such acts.

“The Lance Corporal has served for 17 years [in the force] and that should have given him a better experience to serve this nation,” Lt Mukhwana said.

He also protested the defence submission that the LDU personnel should be given lenient sentences since they have spent less than a year in the force.

“Does it mean that they should be given more powers to kill more people? The UPDF came a long way and it built its trust…someone cannot just come today and begin to tarnish the image of the army,” Lt Mukhwana said.

In his ruling, the Court chairman Col Paul Omara declared that the accused persons were guilty as charged.

Col Omara said that; “After listening to both sides, Pt Thomas Opoka has been found guilty as the key person who caused Ogwang’s death, and I hereby sentence him to life imprisonment. Pt Felix Okumu will serve 40 years and Lance Corporal Geoffrey Ogwang will serve 20 years in jail.”