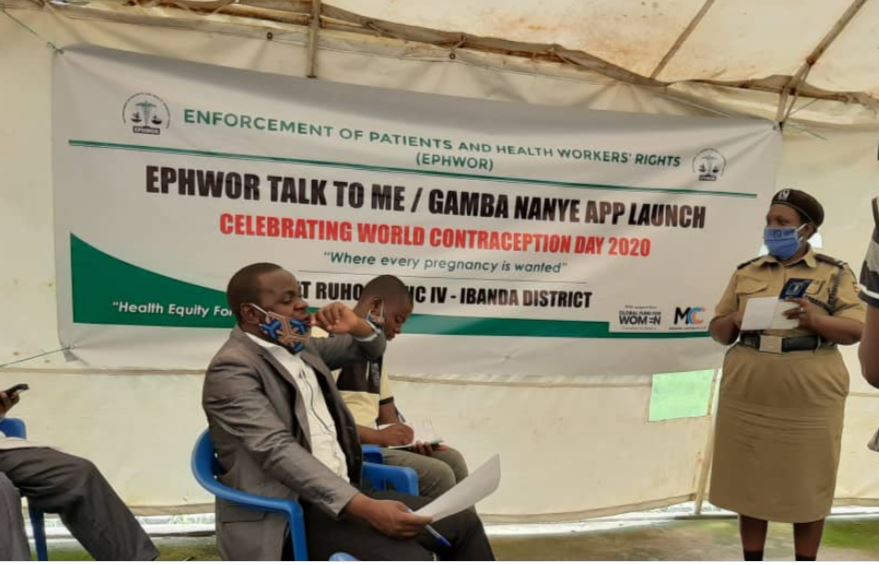 The app, known as ‘Talk To Me/Gamba Nanye’,  is aimed at bridging the gap  between women seeking Family Planning and Contraception solutions with service providers at accredited medical health facilities.

Working under local Nongovernmental Organisation (NGO) Enforcement of Patients and Health Workers’ Rights (EPHWOR), the IT experts have since rolled out the  ‘Talk To Me / Gamba Nanye’ app  at health centres in the western Uganda District of Mbarara  as part of their pilot project.

Sharon Lanyero, who is the Team Leader EPHWOR,  told this website that this is an app developed by EPHWOR to eradicate  the communication barrier between family planning seeking Women and the service providers.

“It translates Runyankole to English and vice-versa and makes it easy for women to make informed choices on the family planning method to use,” Lanyero said, as EPHWOR commemorated World Contraception Day September 26th, 2020.

She explained that preparations are under way to translate the app to other vernacular dialects like Luganda, Lusoga, Lunyoro, Lugisu, Acholi, Ateso and other indigenous languages such that Ugandans in other parts of the country can be able to access and utilise it for their benefit.

Lanyero revealed that the project is currently being implemented in partnership with the Mbarara Corporate Club and supported by the Global Fund for Women, although EPHWOR is negotiating with other partners, including  the Ministry of Health to come on board.

She revealed that last week EPHWOR  IT staff demonstrated to Health workers, Police and other stakeholders at Ruhooko HC IV in Ibanda District how the Talk to me/Gamba Nanye app operates, such that they could become familiar with it, although preparations are ongoing to hold similar demonstrations at health centres in other districts.

The commemoration of world contraception day and launch of Gamba Nanye app was graced by the District Health Officer Ibanda,the C/M  LCV Ibanda Mr Kazwengye Melchedious and the chief guest who was the minister of Karamoja Affairs Eng. John Byabagambi.