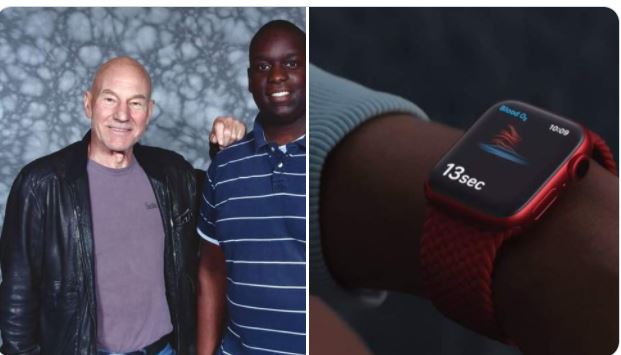 Uganda is increasingly producing experts in Information Communication and Technology (ICT), who are making great strides in the digital era.

As you read this, Jeofrey Kibuule, a 31-year-old Ugandan doctor working with Apple, is being hailed for having co-developed a life-saving blood oxygen monitor in the latest Apple watch series 6.

The software engineer has also worked in the technology hub of the world, Silicon Valley. Kibuule, is a young, reserved, inspiring, and innovative lad.

He works at Apple and he recently came into the limelight after the launch of the latest Apple watch series 6 where he co-developed  the life-saving blood oxygen saturation sensor.

The blood oxygen saturation monitoring sensor in the Apple watch series 6 that was launched last week was developed by a team of Apple Software Engineers led by Dr. Kibuule, who is one of the best Ugandan-American software Engineers in the diaspora.

A brilliant but soft-spoken young man, Kibuule, who broke the glass ceiling when he became the first known Ugandan-American to graduate with a Bachelor of Science (BSc) degree at the age of 18 from the University of Texas at Austin (UTA), one of the top public universities in the United States, USA, has since proved that he is a man of many firsts.

Kibuule’s leadership, ingenuity, and demeanor are now winning him recognition, praise, and fraternity with everybody who is somebody in the tech world.

His interdisciplinary academic and professional interests span medical and technology boundaries with a passion for innovative solutions to save and improve human life.

He first ventured into technological innovations when he developed the “Pocket Lab Value” App which catapulted him on a global stage to collaborate with medical professionals in Laboratory investigations for health solutions.

His recent co-development, the “Oxygen Saturation Sensor” with a team of fellow software engineers who he led at Apple and is now installed in the trend-setting digital watch released by Apple appears to be just a tip of the iceberg.

Technology-sector experts seem to agree that Kibuule’s passion for medicine and technology is destined to make a huge impact on the development of solutions to improve the delivery of healthcare services in the burgeoning field of telemedicine.

Before joining the  University of Texas at Austin (UT-A) and Baylor College of Medicine, Kibuule graduated from the Honors College of Science, Technology, and Mathematics (STEM) of Texas at the University of North Texas. He completed the 4-year high school education in two years.

The second-born son of Dr. and Mrs. Mawanda Kibuule, of Desoto, Texas, Kibuule studied medicine and graduated from the Texas-based Baylor College of Medicine with an M.D. in 2014.

Interestingly, his family of 5 boasts of four of its members with doctorates; the father, the retired Dr. Pascal Mawanda Kibuule (Ph.D.) is a physicist with a scholarly and professional track record that spans forty years.

Kibuule’s elder brother, Dr. Leonard K. Kibuule, MD, a FAAOS – Orthopedic Spine Surgeon, is among the 20 top spinal code surgeons in the United States while his youngest sister and baby of the family, Dr. Grace N. Kibuule, is now pursuing her residence in Anesthesiology at the University of San Francisco, California. Their mother, Mrs. Jane Kibuule, is a CPA.

The Ugandan-American community in Dallas Fort Worth (DFW) and the EADM editorial team join the Dr. Mawanda Kibuule family in congratulating their son Dr. Jeofrey Kibuule, upon his latest achievement with Apple Inc.