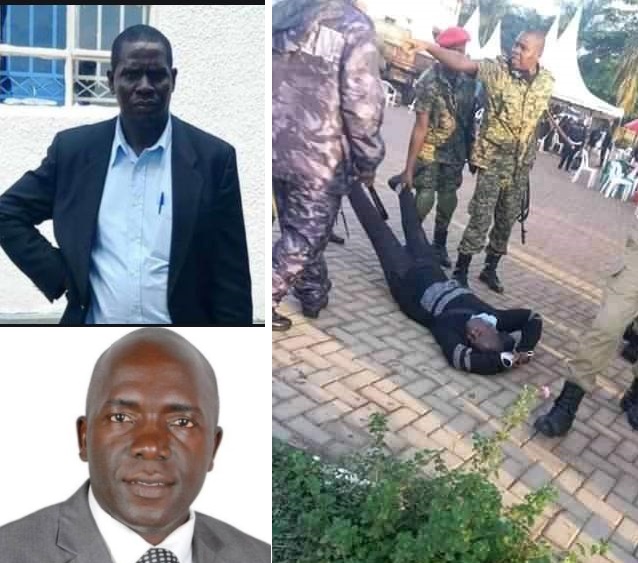 The Uganda Police have refuted allegations that the National Resistance Movement (NRM) chairman who died on Tuesday as a result of gunshot wounds was shot by the army.

Eric Kyeyune, who was a boda-boda rider and NRM chairman for Kitubulu, died after the army and police shot bullets amongst protesters in Entebbe municipality, who were protesting against resulst announced by the Electoral Commission which indicated that Fabrice Rulinda, an independent candidate, had trounced  Democratic Party candidate Vincent Kayanja DePaul.

Following the fracas that broke out after the Returning Officer Tolbert Musinguzi had announced the Rulinda’s victory, the police and army fired bullets and teargas amongst Kayanja’s supporters, which left  Kyeyune dead and several others wounded.

According to the official results released by Musinguzi on Tuesday morning, Rulinda won with 6,703 votes, followed by the Mr Mutebi who polled 6, 342 votes. In third position came incumbent and DP’s Kayanja who garnered 5,576 votes.

Others in the race were; National Unity Platform (NUP)’s Olive Nasuuna who got 2,499 votes, Alliance for National Transformation (ANT)’s Kenneth Ssimbwa with 45 votes, former Entebbe municipality MP Muhammad Kawuma who got 521 votes and Gerald Muwonge with 13 votes.

However, Kayanja refuted the election results, claiming that the election had been rigged, because by the close of voting day on Monday, Fabrice was in third position.

According to their tally sheet, they had led the race with 5,672 votes and the runner up posting 2,825 votes.

Moments before the results were announced at Wakiso tally centre, Kayanja complained about the tally sheet projected on the screen as they were not matching with what his team had tallied. Upon, declaration, chaos ensued with a team of councilors from Entebbe and their supporters from other areas protesting.

However, the police have since revealed that the bullets that killed  Kyeyune were not shot by the army of SFC as alleged and they are still  hunting for the shooters.

Police Spokesperson Patrick Onyango said thus in a statement he released shortly after the incident;

“Police in Entebbe are investigating a case of murder by shooting of a one Kyeyune Erica, a boda boda rider who was shot by a yet to be identified person that happened 26/ 01/2021 at about 1020 hours.

It is alleged that the incident happened at Entebbe Central market, where the deceased is believed to have been part of the riotous mob who were protesting the declaration by Wakiso Returning Officer of Mayoral aspirant, an Independent candidate in the race for Entebbe Municipality, one Fabrice Rulinda as the winner of the Monday Mayoral elections.

This was to the dismay of the electorates who were sure the NRM flag bearer, Mutebi Michael had sailed through as per the provisional results at the divisional electoral offices…”