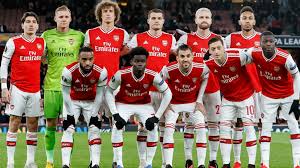 Arsenal came from behind to seal a creditable 3-1 win against Southampton that sees Mikel Arteta’s side climb to eighth in the Premier League.
Nicolas Pepe cancelled out Stuart Armstrong’s early strike before Bukayo Saka calmly finished six minutes before the break. The winger then turned provider with 18 minutes remaining crossing for Alex Lacazette to score from close range.
The win at Saint Mary’s extends the Gunners unbeaten run in the league to six games ahead of a tasty encounter with Manchester United next weekend.
Pre-game
Mikel Arteta made five changes from the side that started at Saint Mary’s on Saturday. In came, David Luiz, Thomas Partey, Bukayo Saka, Emile Smith Rowe and Alex Lacazette. Gabriel, Mohamed Elneny, Gabriel Martinelli, Willian and Eddie Nketiah dropped to the bench. Kieran Tierney missed out with a calf problem, as did Dani Ceballos and Pablo Mari, while Pierre-Emerick Aubameyang stayed back in London due to a family issue.
First Half
When Alex Lacazette missed a sitter inside the first minute, you wondered what kind of a night it was going to be for the Gunners. The Frenchman, put through on goal by Xhaka, looked destined to score only for McCarthy to charge out and block.
When the Saints replied with an attack of their own, Rob Holding had to be alert to force an Ings header for a corner. From the resulting set piece, Ward-Prowse spotted Armstrong unmarked on the edge of the box and the Scot swept home on the bounce. Leno got a hand on the effort but there was too much pace. (0-1)
Not the start we wanted, but you could see there was more energy in the side compared to the weekend. Our pressing from the front paid dividends five minutes later. Lacazette forced Stephens into a loose pass. Saka picked up the ball, flicked it to Partey who in turn fed Xhaka. The Swiss looked up, spotted a run of Pepe inside his marker Valery, and the Ivorian held off his man to fire home on the diagonal. (1-1)
In the pouring rain, the game continued to swing from end-to-end. Cedric, who had a decent opening 45 minutes, sliced a volley just wide. Hassenhutl’s men are canny operators these days and they weathered the storm. For 10 minutes, the found ways through our press, Ings and Adams picking up the ball between the lines to free the likes of Walcott and Armstrong.
Walcott scuffed wide, Ings tried a cute volley from a Ward-Prowse free-kick, an Adams header forced Leno into a save and Armstrong and Valery both tried curlers from opposite sides of the box.
The home side looked the more likely to score, but it was the Gunners who had the cutting edge. There were six minutes to go in the half when Pepe challenged in the air for a Leno goal-kick.
As the loose ball dropped to Xhaka, he was quick to find Lacazette who in an instand fed Saka racing through the defence. The youngster, faced with McCarthy charging out, dribbled around the keeper and tucked home from the edge of the box.  It was a classy finish. (2-1)
Second Half
Walcott stung Leno’s palms with a decent effort to signal the home side’s intent in the opening stages but again we forced them back.
Smith Rowe came close to extending our lead when he nicked an effort over McCarthy but was mopped up by Stephens. Not long after Bellerin, after some neat interplay with Saka, came close to picking out Pepe at the near post.
Cedric’s marauding down the left on 59 minutes resulted in more pinball in the Saints box but again the ball was scrambled clear. Four minutes later the Portuguese sprayed a fine cross-field pass to Saka freeing the winger to try his luck from range. His effort skipped wide.
Ings set pulses racing with a slaloming run through a packed Arsenal defence before Leno did the dirty work with his feet.
Arteta was set to send on Martinelli for Pepe with 21 minutes remaining but had to change his mind when Smith Rowe went down with an injury. Willian was sent on instead but not before referee Kevin Friend booked Pepe for time-wasting after he trudged to the touchline for a substitution that never was.
Almost immediately we grabbed the vital third goal. Cedric again sprayed a beautiful pass to Saka and this time the England international rolled an enticing ball across the six-yard box for Lacazette to bundle home. He ploughed into the post in the process and had to celebrate his 10th goal of the season in pain on the turf. (3-1)
Despite the extra breathing room, the Saints still looked capable of snatching something from the game. Leno twice came to the rescue. First, he bailed out David Luiz who’d had a brain freeze in the box under pressure from Adams and then he parried away a Ward-Prowse free-kick.
A speculative effort from Pepe aside, that was pretty much that. After the weekend’s disappointment, this was a very decent performance and an even better result.
The games continue to come thick and fast but 16 points from the last 18 is evidence that something is clicking.