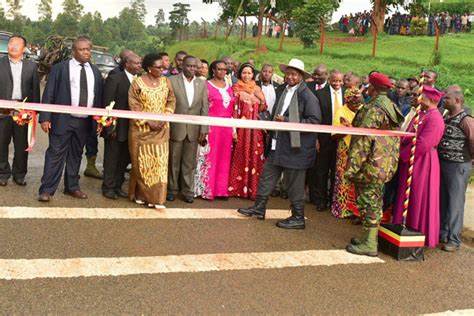 Ugandan President Yoweri Museveni on Saturday launched the Chinese-constructed 104-km Musita-Lumino-Busia-Majanji road linking the eastern part of the country to the border district of Busia in Kenya.

Katumba Wamala, minister of Works and Transport, said the road was upgraded from gravel to bitumen standard.

Wamala, while saying the road was fully financed by government, encouraged people to “take full advantage of such government interventions to improve their household income, which then support government’s social-economic transformation programs.”

The two-way two-lane road, constructed by China Railway 18th Bureau Group Co. Ltd, will shorten the travel time from Busia to Jinja from the original five hours to two hours, effectively alleviating the material transportation problem in eastern Uganda, according to the Ministry of Works and Transport.

The design speed on the road is 90 km per hour.