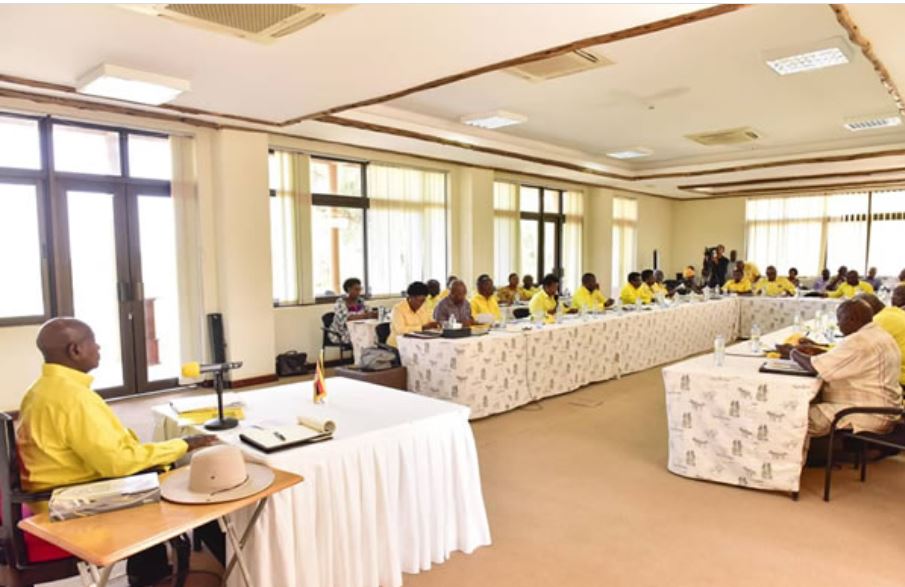 The CEC, which sat at State House Entebbe, approved the much awaited party election Roadmap and adopted lining up behind the candidates as a mode of voting.

This, however, is to be done in accordance with the COVID-19 health guidelines and Standard Operating Procedures (SOPs) issued under the Public Health Act.

In the approved SOPs open rallies have been banned, with every voter to wear a face mask and polling officials to ensure a 2M distance rule.

The NRM National chairman President Museveni told CEC members that the lining up was cost effective and prevents rigging elections.

According to the NRM Director of Information and Communications Hon. Emmanuel Dombo, the election roadmap was adopted in the CEC meeting and the mode of voting will be done in conformity with Government regulations on Coronavirus restrictions.

Hon. Dombo said that; “Nomination for Members of Parliament and LC 5 Chairpersons will be carried out from 10th to 17th August in Kampala.”

He added that; “The nomination for Special Interest Groups (SIG) will take place from 20th to 22nd July and voting for the same will be on 25th July 2020.”

Dombo also revealed that nominations for MPs will take place on 7th September 2020, while that of LC 5 Chairpersons, Councilors, Municipal Mayors and Division Mayors, LC 3 chairpersons and their councilors will be held on 28th August 2020.

He noted however that the nominations will take place on same day throughout the country, contrary to earlier reports that it would be held in regions on different days.

The ruling NRM party is today set to launch its election Roadmap after its approval by CEC.