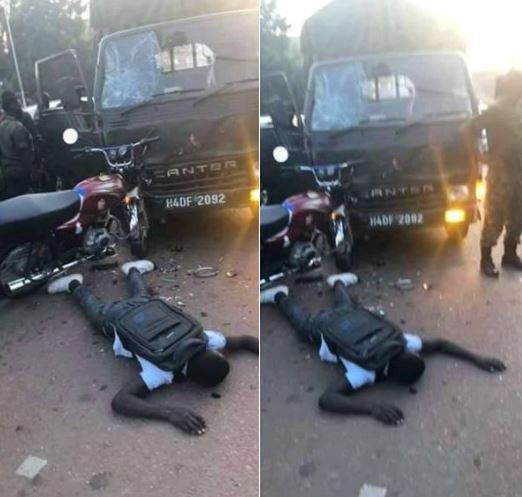 The police in Wandegeya are hunting for a reckless driver belonging to the Uganda Peoples Defence Forces (UPDF) who allegedly knocked dead a boda-boda rider in Nakulabye, Kampala, on Monday afternoon.

According to eyewitnesses, the yet be identified boda-boda rider was knocked dead around Chez Johnson Hotel as he rode to Nakulabye from Wandegeya side.

He collided head-on with the UPDF truck registration number H4DF 2082, which was being driven by a yet to be identified driver, who however fled from the scene shortly after causing the  accident.

The body of the deceased was later picked by police and taken to Mulago Hospital mortuary for postmortem as investigations into the matter and hunting for the errant UPDF driver continue.

The time of filing this story the UPDF were yet to issue a statement about this unfortunate incident.