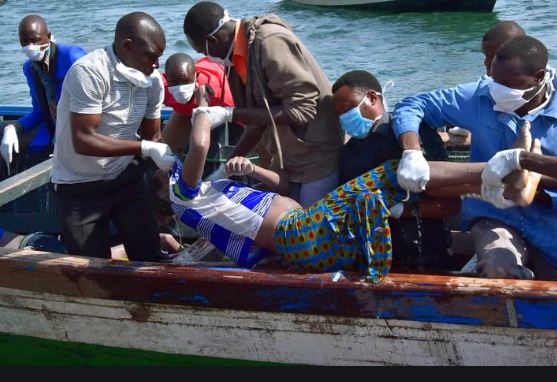 At least 16 people are said to have drowned on Monday and several others are still missing after a boat that was carrying over 20 people capsized on Lake Albert.

According to eyewitnesses, the boat was carrying residents of Mbegu landing site in Buseruka Sub-County, Hoima District, when it reportedly capsized at around 3:00Am, due to overloading.

It is said that the occupants of the boat had allegedly sneaked and crossed to Mukambu in DR Congo for burial on Saturday and were returning to Uganda when the tragedy occurred. Identities of the deceased had not yet been established  by the time of filing this article.

According to Sulaimman Wako, a resident of Mbegu landing site, five people have so far been rescued from the lake.

They were rescued by fishermen from the DR Congo and taken to Mukambu landing site in DR Congo. Some of those rescued include; Ajaru Katanga, Aduba, Pyer Sesanga and an 11 year old child whose name was not readily available by press time.

Julius Hakiza, the Albertine region police spokesperson told the media that all the people on the boat, residents of Mbegu landing site allegedly bypassed security and sneaked to DR Congo after receiving information that their relative had died.

Hakiza said that “The boat accident occurred on Monday morning as they were coming back to Uganda after the burial. The boat capsized on the other side of the DR Congo.”

He however noted that the cause of the accident could have been overloading since over 20 people were on the small boat that is meant to carry only 10 people.

He said currently they are liaising with their counterparts from the DR Congo to commence a search for the missing bodies and survivors, if any.

Hakiza further explained that they are investigating how people illegally sneaked into the DR Congo given the heavy security deployed on the Lake Albert waters and the current COVID-19 lockdown.