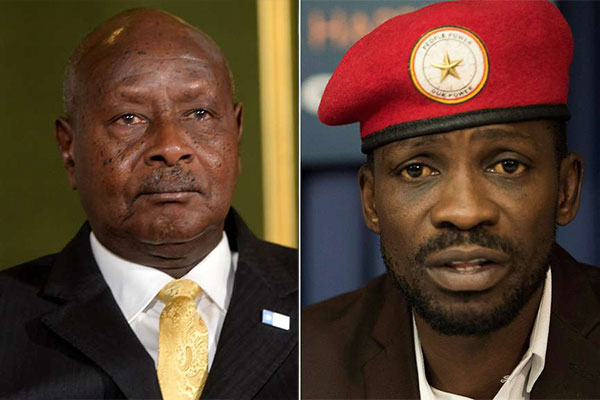 People Power movement leader Robert Kyagulanyi aka Bobi Wine, who is also the Member of Parliament for Kyandondo East, has refuted allegations that he recently decided to opt out of the 2021 presidential elections.

Bobi Wine on Monday refuted allegations  that had been circulating on social media to the effect that he had decided to pull out of the Presidential race on advice from his foreign funders, such that he could concentrate on running for the MP seat again as he prepares for the 2026 election.

However, during a press conference he held today at the People Power headquarters in Kamwokya, Bobi Wine trashed the rumours and wondered what the motive of those spreading them is.

“Ladies and gentlemen I would like to assure you that I am ready and I shall challenge Museveni in the 2021 presidential election,” Bobi Wine said.

The ghetto gladiator added that “We have heard rumours circulating that I had decided to pull out of the election. Those are false rumours that should be disregarded and treated with the contempt they deserve.”

Commenting about the same matter, People Power spokesperson Joel Ssenyonyi tweeted thus; “This is Fake News, treat it with the contempt it deserves!”

Earlier on word had circulated indicating that Bobi Wine and his team had decided to pull out of the 2021 elections because of the challenges posed by the Coronavirus (COVID-19) outbreak and the eventuality that although President Yoweri Museveni might win the 2021 election, chances are high that he will not participate in the 2021 election due to age.