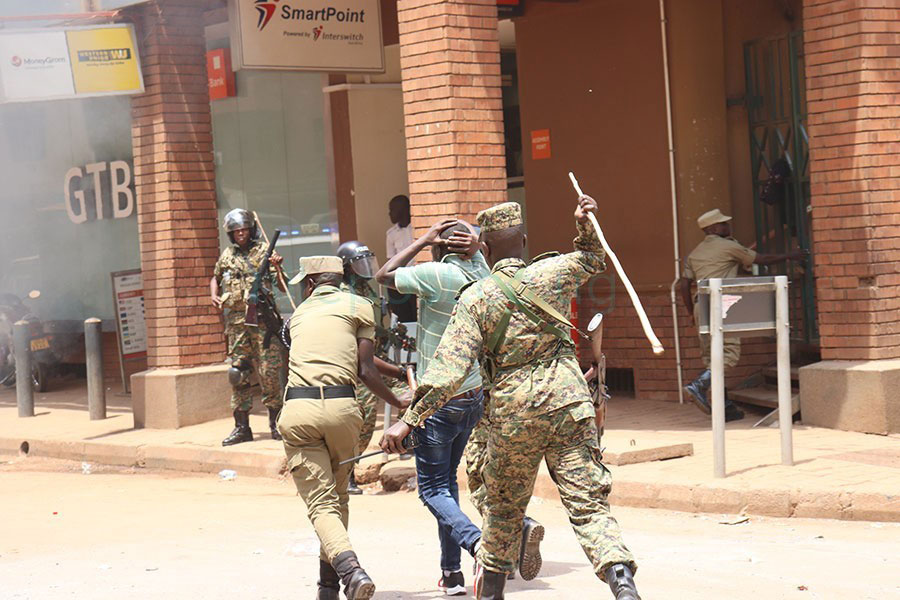 UN human rights experts* today expressed serious concerns about the violence ahead of Uganda’s presidential election, and urged authorities to put an end to the arrest, detention and judicial harassment of political opponents, civil society leaders and human rights defenders.

Media outlets have reported that three journalists were hurt on Sunday after being hit by tear gas canisters in Masaka. Opposition leader Robert Kyagulanyi, also known as Bobi Wine, said one of his bodyguards died after being hit by a military truck later the same day. The military has denied this, saying he fell from a speeding car.

“We are gravely concerned by the election-related violence, the excessive use of force by security personnel, as well as the increasing crackdown on peaceful protesters, political and civil society leaders and human rights defenders,” said the experts.

“Since the publication of the guidelines on the conduct of elections during COVID-19 in June by the Uganda Electoral Commission, we have witnessed gradual shrinking of civic space, and misuse and abuse of health-related restrictions to curb dissent in the country ahead of the election on 14 January. Time and again, we have emphasised that the fight against the COVID-19 pandemic should not be used as a pretext to infringe on fundamental freedoms.”

On 23 December 2020, Nicholas Opiyo, a prominent human rights defender, was arrested along with four other individuals. According to the official statement made by the authorities, he is accused of money laundering and will be tried accordingly. Opiyo was involved in the defence of four NGOs whose assets were frozen on 12 December by the government on charges of financing terrorism, and was vocal against actions taken by the State security forces amidst the electoral context. The Uganda Women’s Network (UWONET), the National NGO Forum, the Women International Peace Centre, and the Alliance of Finance Election Monitoring (AFEM) have been active in election campaigns encouraging the participation of women and youth.

“Combatting terrorism should never be used as a justification to undermine the credibility of associations or to unduly impede their legitimate work,” the UN experts said. “We are gravely concerned about this attack on human rights defenders, civil society actors and those who defend them. The prosecution of Nicholas Opiyo and other lawyers, as well as the judicial harassment of those who express dissent, appear to be strictly related to the electoral context, and fictitious charges being used to justify them.”

This repressive trend has also targeted the opposition leaders. On 18 November, Kyagulanyi was arrested while addressing National Unity Platform (NUP) supporters. Police said he was arrested for defying the guidelines issued by the Electoral Commission by gathering more than 200 supporters.

“Although released, we are concerned that he risks being prosecuted under section 171 of the Penal Code, for negligent act likely to cause spread of an infectious disease,” said the experts. “We warn against the impact of the actions taken by the police and the judicial system, which may have a chilling effect on dissent and on civic space in the run-up to the elections. The repression can in turn instil widespread fear, and discourage an open and transparent campaign as well as free and fair elections.”

The UN experts have expressed their concerns to the authorities and urged them to drop all charges against all those who have been arrested during the election campaign period and to put an immediate end to judicial intimidation of human rights defenders, journalists, civil society leaders, peaceful protesters, political parties and those who express dissent.

The experts called on the authorities to take all necessary measures to ensure an environment conducive to peaceful and transparent elections. “Any action which may fuel further social tension must be avoided, and the voices of people and their representatives must be fully taken into account,” they said.

The Special Rapporteurs and Working Groups are part of what is known as the Special Procedures of the Human Rights Council. Special Procedures, the largest body of independent experts in the UN Human Rights system, is the general name of the Council’s independent fact-finding and monitoring mechanisms that address either specific country situations or thematic issues in all parts of the world. Special Procedures’ experts work on a voluntary basis; they are not UN staff and do not receive a salary for their work. They are independent from any government or organization and serve in their individual capacity.