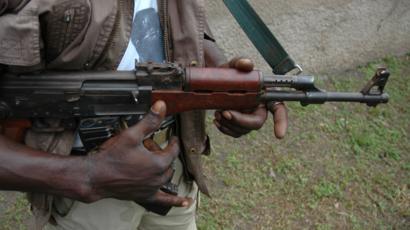 A soldier in the eastern Democratic Republic of the Congo has shot dead at least 12 people and wounded nine others in a drunken rampage, regional authorities have said.

Security services are conducting a search for the gunman in the city of Sange, 24km (15 miles) from the Burundi border, where the shooting took place, the governor of South Kivu province, Theo Kasi, said in a statement on Friday.

“The person responsible is a drunken member of the FARDC (DR Congo armed forces) who opened fire on at least 20 civilians who crossed his path,” a prosecutor in Uvira said.

Captain Dieudonne Kasereka, the army’s spokesman in Uvira, said the gunman was on the run and is still armed.

“An army delegation and a UN team is in the area to calm the population, which is demonstrating against the army,” he said.

Ndaburwa Rukalisa, a local leader in Sange, said the soldier was a member of the 122nd Battalion of the FARDC, based locally, and was “in a state of drunkenness” at the time.

Nine people were hospitalised in “critical” condition, he added.

The provisional toll of 12 dead was confirmed by witnesses, while a judicial source said a two-year-old girl was among those who died in the rampage.

President Felix Tshisekedi called the attack a heinous crime and offered his condolences to the victims’ families.

The DRC’s vast army is widely seen as poorly trained and unprofessional, and its personnel are frequently accused of committing crimes against civilians.

Senior generals are under US and EU sanctions for alleged abuses, and are accused by the United Nations of having supplied weapons to rebels and criminal gangs.