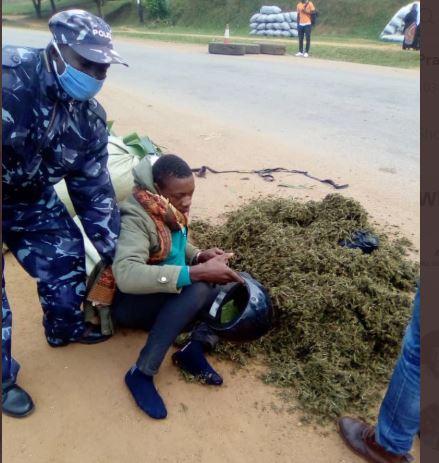 The Uganda Police have arrested  a drug dealer which over 50Kg of marijuana, which he was transporting to Kampala from Mityana District.

The Suspect, who is yet to be identified, was arrested by police along the Mityana-Mubende highway as he tried to smuggle  the marijuana to Kampala, using a mortocycle.

However, on being flagged down by the police who had mounted a roadblock along the way, the cops were shocked to discover that the motorcycle rider was carrying a sack which was full on marijuana.

Shortly after his arrest, the suspect was taken into custody  to help the police with investigations  into where he was talking the marijuana and for who.

It should be noted that trading in cannabis in Uganda is illegal; the drug is locally referred to as bhang. Cannabis is the only natural narcotic produced within the country.

In as early as 1902, the British banned the production of “opium” in Uganda, noting that opium “includes… also the preparation known as bhang, ganja, churus, and chandoo natron”. A 1902 British ethnological work noted that cannabis was used in Uganda, only by men, and particularly smoked in a water pipe.