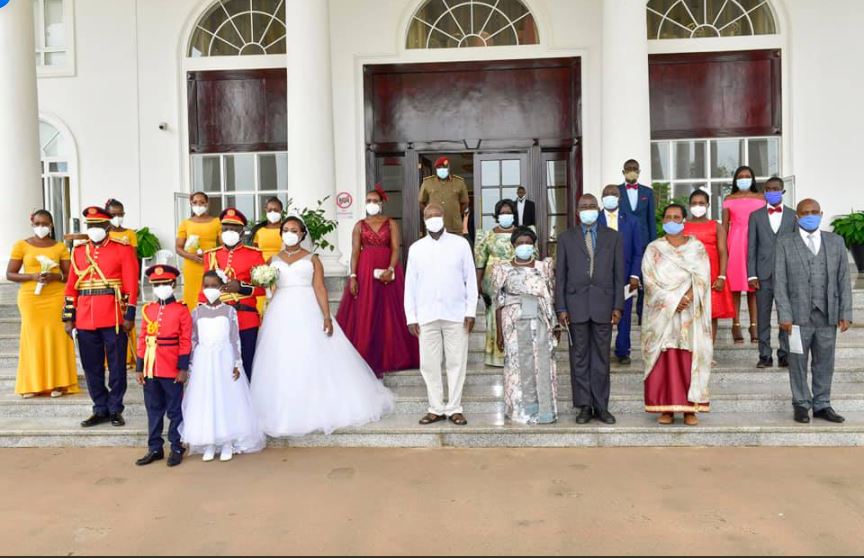 President Yoweri Kaguta Museveni, who is also the Commander in Chief of the armed forces, has lauded Brig. Peter Chandia, who is the Deputy Commander of the Special Forces Command (FDCSFC) upon legalising his relationship with long time Doreen Busingye.

Brig. Chandia and Busingye exchanged their holy matrimony vows at a scientific wedding ceremony that was held at St. John’s Church of Uganda, Entebbe on Saturday,  which was attended by a few close family members, military officers and other government officials.

Shortly after tying the knot Brig. Chandia and his bride were hosted at State House Entebbe, where their marriage was blessed by President Yoweri Museveni, who was very pleased to host the newlywed couple.

In his congratulatory message for the nuptials,  President Museveni stated thus; “Brig. Peter Chandia, the SFC Deputy Commander, and his wife, Doreen Busingye, wedded today at St John, CoU, Entebbe. I could not join them in church but hosted the bridal entourage to a luncheon at State House Entebbe. I congratulate the couple on this milestone.”

We have since learnt that after being treated to a luncheon at State House by the President, the couple hosted a sumptuous banquet for their guests and friends at the Windsor Lake Victoria Hotel, where they indulged in merrymaking until the wee hours of Sunday morning.