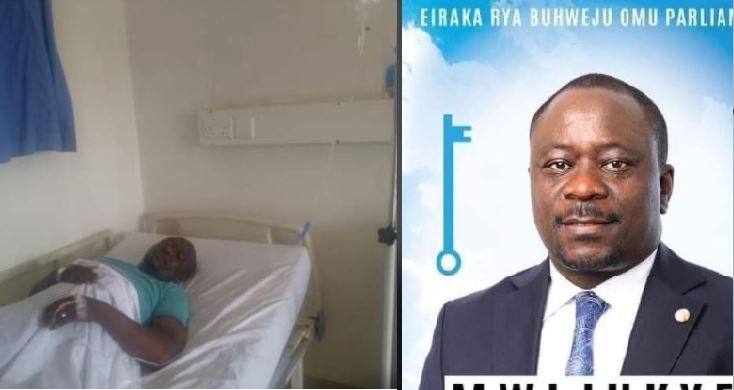 Veteran Forum for Democratic Change (FDC) stalwart Francis Mwijukye, who is the Member of Parliament for Buhweju County is bedridden and battling for his life after he survived poisoning last week.

Mwijukye, who is currently undergoing specialised medical care following a lengthy detoxification process,  was reportedly poisoned  last week through food he ate at one of the top city hotels.

He is said to have been rushed to hospital by family members shortly after complaining of abdominal complications and lucky enough medics did quick toxicology tests who turned out positive, which prompted them to immediately start the detoxification process.

By the time of filing this article Mwijukye had come to and managed to share a message on his social media platforms  about his poisoning, in which he stated thus;

“Friends we are in interesting times. Mind where you eat. I survived by the grace of God. God has given me another chance to live. Poisoning is real.”

However, he did not divulge details of where he ate the poisoned food from or whether he had reported the matter to the police and they had commenced investigations into the unfortunate attempt on his life.

This is the second time Mwijukye, who is contesting for the same position he currently holds, is surviving death.

Last year Mwijukye cheated death after he got involved in a nasty accident that occurred in Mbarara City.

Mwijukye and Rwampara County MP Charles Ngabirano survived a terrible accident that left several people injured when a car the duo was travelling in, a Toyota Land Cruiser, had a head on collusion with another Toyota Wish near Agip in Mbarara City.

The MPs were travelling from a weekly Political Talkshow at 100.2fm Radio West, “Manya Ebirikufa Omwihanga Ryawe,” where they had been hosted Sunday May 24, 2019.