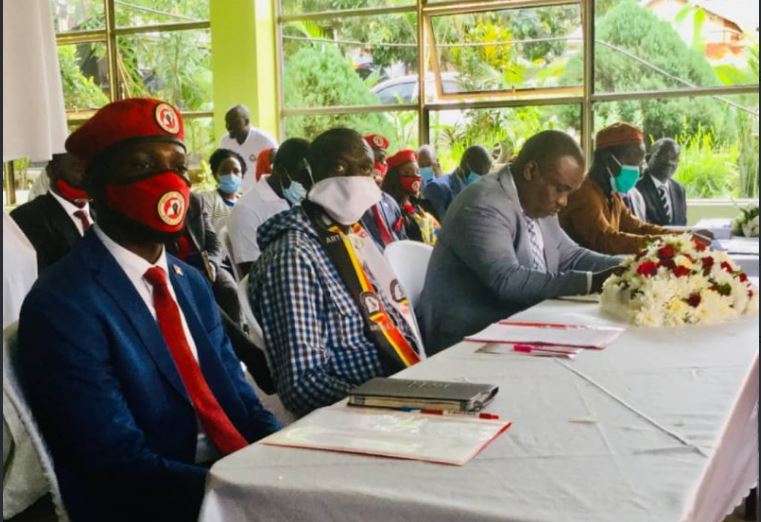 A joint force of the Uganda Police and Local Defence Unit on Monday afternoon stormed  Rose Gardens Hotel in Wakiso District, where they disrupted a joint press conference between People Power leader Robert Kyagulanyi and Col. Dr. Kizza Besigye of the Forum for Democratic Change.

Our Moles reveal that the police, which accused the politicians of breaching Presidential Guidelines on social distancing as was of fighting the spread of COVID-19, fired teargas and rubber bullets at the hotel to disperse the meeting, which was attended by among others Mukono Municipality MP Betty Nambooze, Lord Mayor Elias Lukwago, Bugiri Municipality MP  Asuman Basalirwa, Mityana Municipality MP  Francis Zaake, among others.

Besigye and Bobi Wine revealed that they had decided to unite opposition forces under a coalition dubbed ‘United Forces of Change’, which they claim will unite all opposition leaders under one umbrella body with  the objective of overthrowing President Yoweri Museveni in the 2021 General Election.

Besigye called upon all Ugandans to express their dissatifcation by making noise through  banging empty saucepans, blowing whistles, vuvuzelas, hooting car horns and or hitting any object that can make noise.

On his part, Bobi Wine said that “The more we fight against each other, the more we delay the change that Ugandans want. As leaders, we can only see and show you the way but we must all work together. I call upon all Ugandans to speak up and speak loudly. Say ‘No’ in word and in action. This is going to be the necessary noise..”

On top of demanding that government should distribute more relief food to all Ugandans, Besigye and Bobi Wine want government to consider the alternative of providing cash handouts to struggling Ugandans who were affected by the COVID-19 lockdown, because some countries like Kenya, Rwanda, USA, UK and others  are doing it.

They also want an independent organ to be part of designing the mode of delivery of these funds so as to reduce corruption and other ills.

“We propose that each vulnerable family receives a minimum of 100,000/= per week,” they said.

The two camps have also called for an audit to be conducted in the manner in which different government entities have handled the Covid19 crisis.

The called for an independent institution to be instituted to “guide the country into recovering from the damage cause by the COVID19 pandemic and the attendant mismanagement by the regime.”

Although Bobi Wine and Besigye managed to hold a press conference together with others, it should be noted that during many of his National Addresses on Coronavirus, President Museveni has reiterated that political and all other forms of gathering were suspended in Uganda until the COVID-19 lockdown is lifted, since they breed fertile grounds for the spread of the virus.