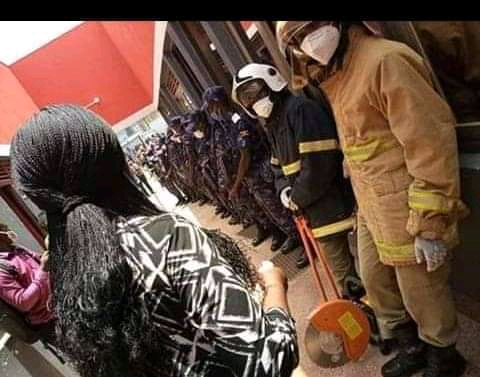 Roads leading to party offices were cut off as police parked huge trucks in front.

Security officers forced open doors and took items from inside. They later asked members of the party to sign for what was taken.

“They have taken paraphernalia, that is red berets. T-shirts. They have taken documents … we are still trying to establish exactly,” Ssenyonyi said. “They also broke into honorable Kyagulanyi’s office, which had many sensitive documents. We were preparing to take his signatures that we have collected from different parts of the country to the Electoral Commission on Friday and many of those documents are now missing.”

One of the requirements to run for election is to have signatures of support from 100 registered voters from at least two-thirds of Uganda’s districts.

Hon. Robert Kyagulanyi, said his team had already collected 6 million signatures, but that these are missing from his party’s offices.

“Museveni’s government is trying to block me from nominating as a presidential candidate,” he told reporters.

“From questioning my academic credentials, to questioning my age, now they are making every effort to frustrate my nomination and I want to believe that is why they took the signatures away.”

Asked about where this leaves his aspirations of ending Mr Museveni’s 34 years in power, he said: “We’re not giving up.”

“We have immediately communicated to our branches to ensure they start collecting the signatures immediately and hopefully by Friday we’re going to have the required signatures,” he said

Police have not responded to accusations that they took election-related documents during the raid.

Aspiring candidates for parliament are due to present their credentials and nomination fees to the Electoral Commission beginning Thursday.

It was not clear how candidates from the National Unity Platform will submit their forms if police have their documents.

Uganda goes to the polls early next year to elect new legislators and the next president. Bobi Wine is expected to challenge Museveni, who has ruled Uganda for 34 years.