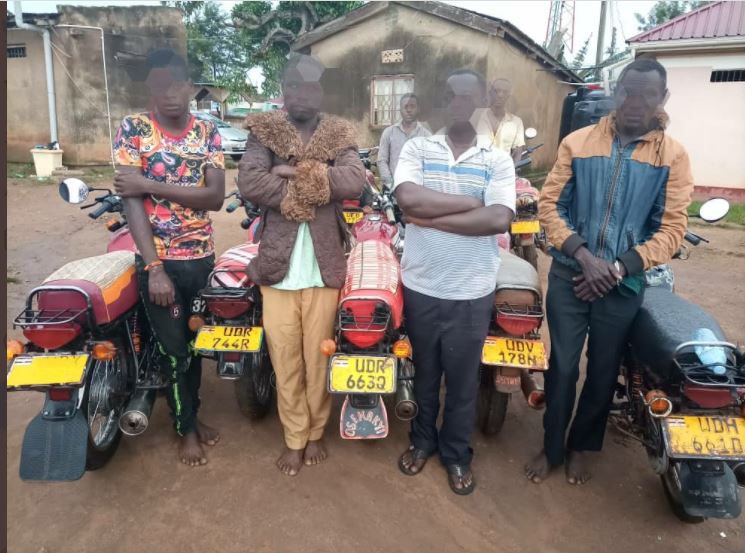 The Police in Kakiri have arrested nine suspects and recovered nine motor cycles from notorious criminal gang that have been robbing people in the surrounding areas.

The operation to net the thugs was launched after a report of stealing two motorcycles was registered at Bukalanga Police Post under Kakiri Division, by Kiwanuka Elijah, 33, a businessman and a resident at Kikubampanga zone, Kakiri Town Council in Wakiso District.

He told police that on the night of 30th September 2020 at unknown time, unknown people broke into his house and stole two motorcycles Reg. Nos. UDR 663Q and UDL 710Z both Bajaj Boxer.

Police Spokesperson SP Patrick Onyango said that there after Police opened up inquiries, visited the scene of crime and relevant statements were recorded.

During the operation, nine suspects were arrested in connection to this crime.

He added that “During the investigations, four forged log books were recovered from the suspects.

Police established that in the night of 30/09/2020, at unknown time of the night, thugs broke in the house of the complainant where he had kept his two motorcycles Reg Nos. UDL 710Z and UDR 663Q and stole those motorcycles and the complainant reported the matter to police for assistance.”

He revealed that fortunately, motorcycle Reg. No. UDR 663Q belonging to the complainant was sold to one Kityo John who incidentally works with the complainant at the same Boda Boda stage in Kakiri Town Council.

The complainant saw his motorcycle with Kityo at the stage and he inquired how Kityo got that motorcycle.

Kityo revealed that he too bought the said motorcycle from one called Mukasa Joseph a mechanic at Kiwawu village in Mityana district at one million shillings (Ugx 1,000,000/=).

Kityo was taken to police by the complainant together with the exhibit motorcycle Reg No. UDR 663Q where he was tasked by the police to lead them to the whereabouts of the Mukasa Joseph whom he alleged sold to him the said motorcycle.

Mukasa Joseph was arrested from Mityana with the help of Kityo John from where he does his work of repairing motorcycles.

On  being interrogated, Mukasa also

revealed that he bought the said motorcycle at Shs850,000/=) and an original log book was given to him after the payment.

Kayemba, the chief architect of this crime, was interrogated and he revealed to police that he steals and sells both old and new motorcycles from almost every part of the country.

It was also established that Kayemba deals with a group of thugs, who go by nicknames and code words like “Afande, Kabalazi and others”.

It was also established that Kayemba was dealing with some unscrupulous employees at URA Nakawa where he could forge log books for all the motorcycles he steals.

One suspect called is an alleged broker at URA Nakawa and was the one  who was at the fore front of forging log books for Kayemba.

Upon interrogation, he too claimed he could forward the number plates to an employee of URA Nakawa who prints those log books for Kayemba Ibra at a price ranging from thirty five thousand shillings to sixty thousand shillings per log book.

It was also established these logbooks could be packed in envelopes and delivered to a mobile money attendant near URA where Kayemba could come and pick them from and he pays twenty thousand shillings for keeping those envelopes.

The mobile money attendant was arrested, interrogated but she feigned ignorance of this crime but claimed she could only give Kayemba Ibra those envelopes without knowing the content therein.

Police is in the process to recover all other motorcycles that could still be in the hands of this criminal racket.

According to the police, this is an organized criminal racket which is terrorising the areas of Wakiso, Mityana, Mubende, Kayunga, Nakaseke, Luweero and the surrounding areas.

Concerted effort by police and sister security agencies is being undertaken to arrest, prosecute, follow up and disband this criminal gang and their activities to make sure our Boda-boda riders are safe as they perform their daily duties.