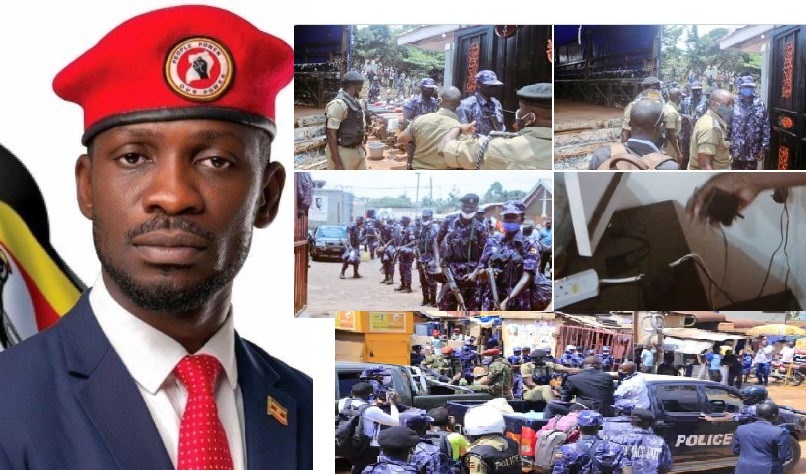 Kyadondo East Member of Parliament Robert Kyagulanyi aka Bobi Wine, who is a 2021 presidential contender on the National Unity Platform (NUP), has said that the police stole his presidential nomination forms and money worth Shs23M when they raided the NUP offices in Kamwokya on Wednesday.

Bobi Wine, who was arrested together with several other NUP members and supporters, although he was later freed, revealed that alleged theft in  tweet on his official twitter handle when he wrote that;

“Our team has just finished assessing what has been stolen in broad daylight. Been informed that most of our forms with signatures for nominations have been taken away! They have also taken 23M ugx part of which was meant to facilitate our MP candidates with nomination fees.”

He added that; “I have also been informed that so many of our people who are selling NUP branding materials in town are being arrested with reckless abandon.

Instead of weakening us comrades, let these actions strengthen us and increase our resolve.”

Bobi Wine also said that documents needed to secure his nomination to run for president are missing from his offices following a raid by security forces on Wednesday afternoon.

Bobi Wine’s lawyer Anthony Wameli said his client was seized on Wednesday at the Kampala offices of his opposition party, the National Unity Platform (NUP).

“The police and the army raided the office of NUP, sealed off the premises and all the roads leading to the place before detaining Bobi Wine and other party officials,” Wameli said.

“This is despicable and an attack on democracy by the partisan police and the army,” he added. The reason for the raid was unknown but “politics cannot be ruled out”, he noted.

Earlier, Bobi Wine had said in a Tweet that police and military officers raided the offices of his party, decrying what he described as the securities agencies’ “stinking” partnership with the establishment in the lead-up to general elections set for 2021.

At the time of the raid, Bobi Wine was meeting other NUP leaders when the police swooped in and cordoned off the area, according to party official David Lewis Rubongoya.

Rubongoya, who was at the scene, said that the security officers confiscated items like security cameras and red berets that are symbols of Wine’s popular campaign.

“They have taken away everything,” he said.

However, according to the police, they raided NUP offices in search for military uniforms that had been hoarded therein, although what they seized were red people power T-shirts and berets.