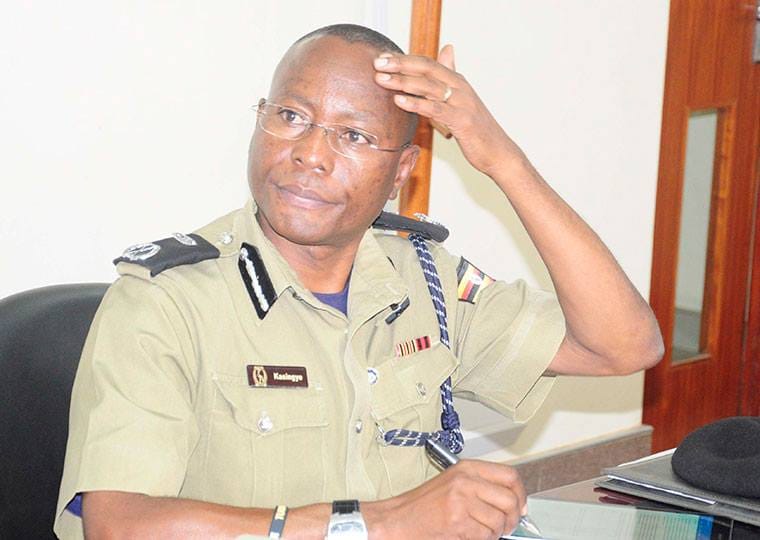 Sources at police headquarters told Elite News on Sunday afternoon that tension is high as people who were in contact with AIGP Kasingye in the last one week are being traced for testing.

Kasingye who is known for attending all major police functions on Friday missed the pass out of 4,809 police trainees at Kabalye Police Training School in Masindi District.

Kasingye, according to senior police officers at Naguru, of recent has been meeting a number of people among others police officers, civilians and people donating items to the police force.

“The IGP assigned him to handle all people who want to meet him. Since COVID-19 outbreak, IGP restricted access to his office except police directors. We suspect he got COVID-19 from some of the people donating items to police who he has been meeting on behalf of the IGP,” said another source.

Some of the people Kasingye met recently include UNICEF team that donated Personal Protective Equipment.

“Today 13th August 2020, Uganda Police Force received personal Protection Equipment from UNICEF in a scientific function held at Police Headquarters, Naguru. The function was presided over by the Director CPC AIGP Asan Kasingye on behalf of the Inspector General of Police,” said Namaye.

AIGP Kasingye extoled UNICEF for the continued support to police in ensuring protection of Rights of Children. The CPC observed that UNICEF support has enabled the police force to fight child related crimes such as child abuse, desertion, sexual violence, child neglect and torture.

Police and other staff at police headquarters were not sure whether tomorrow they will report for work or the headquarters will be restricted for the time being.

However, this week’s PAC was cancelled as directors had traveled to Kabalye PTS for the pass-out. It is not known how many people interacted with AIGP Kasingye since he is very social person and given the nature of his office where he interacts with many people.

Ugandans had mixed reactions on this, here are some of their comments,

“Where did he get it yet he was social distancing and sanitizing, is this Covid a toxin just spread in air or the testing devices have issues. Who carried out the QA/QC, proficiency testing and calibration on those kits, why doesn’t MOH provide data for QA/QC of the Covid 19.”

Felix William, “Eeeeh. Get well Afande. Hope its not a trick to get you out of office to abuse the rights of Ugandans in the name of enforcing Covid19 guidlines,”

(JJ) Jackson Mucunguzi, “What Afande you have reminded me of Bongole Lutaaya those days of HIV scourge!Quick recovery papa.”

Castle on the hill, ” Stop playing games, I travel with a taxi and boda boda daily, I am always down town daily interacting with most people. where the hell did i get it? you are turning into a politician.

Replying to people who doubted him having covid 19, Kasingye wrote,

“I know i got infected while on sworn duty to serve Ugandans, I have a lot of inequalities and falls short of God’s glory. The best way to fight COVID19UG is to pull together and encourage each other,”