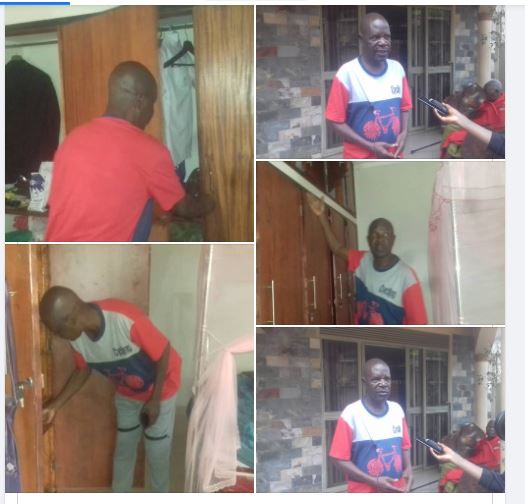 Government spokesperson Ofwono Opondo, who is also the Executive Director of the Uganda Media Council, survived being hacked into pieces by a gang of unidentified thugs who invaded his residence in Nasuuti village, Mukono District on Thursday night.

The yet to be identified thugs invaded   Ofwono’s home at around 2:00AM according to the police, terrorised his family members and confiscated all their home, before stealing a number of valuable items, although they forgot two of their pangas behind as they fled.

Ofwono, who had earlier on reported the matter to police and that  he was away from home at the time of the attack, later posted a picture of  panga on twitter and wrote thus; “Last night attack on my home. I have just seen this machete one of the two left behind by the assailants. It apparently fell against the parameter fence as they fled the compound.”

He had earlier on tweeted that; “My daughter texted me and told me we are under attack. Four men with machetes locked my family in one room and turned every upside down. They asked them where I was. They were hoping to find me. The police has secured the home.”

However, Ofwono is yet to reveal whether any of his family members was harmed and the valuable items the thugs robbed from the house, although by press time the police were still investigating the matter.

Commenting about the matter, Police spokesperson Patrick Onyango wrote on social media thus; “Our territorial team from Mukono responded to the distress call from the home of Mr. Ofwono Opondo the government spokesperson. The family is safe and secure. More updates to follow.”


The police are yet to issue a conclusive statement about their investigations into the matter and we shall report about it as soon as they do.